Is the Employment News Really as Good as It Looks?

Although the headline employment numbers look strong, some say that the underlying reality is actually a lot worse, with few full-time jobs and many discouraged workers. According to the skeptics, it’s a Potemkin recovery, dependent on the fact that many people have simply dropped out of the labor force.

This is a popular meme right now, but the data just doesn’t support it. Using the old “you’re entitled to your own opinion, but not your own facts” methodology, let’s look at the underlying data and draw our own conclusions.

There are three specific parts of the argument that need to be addressed:

Are these full-time jobs?

Let’s look at the actual data:

The growth rate for full-time workers has been and remains at about the level of the early to mid-2000s. We can see the first-quarter dip, but while growth should certainly be faster, this can hardly be called a disaster. Meanwhile, the number of part-time jobs has declined over the past year or so, even as total employment continued to increase.

During the crisis, the part-time versus full-time argument was true—full-time jobs dropped and part-time jobs skyrocketed—but that hasn’t been the case for the past couple of years.

Another way to look at it, which offers more historical context, is to consider the number of workers who are part-time for economic reasons as a percentage of the total employment population. 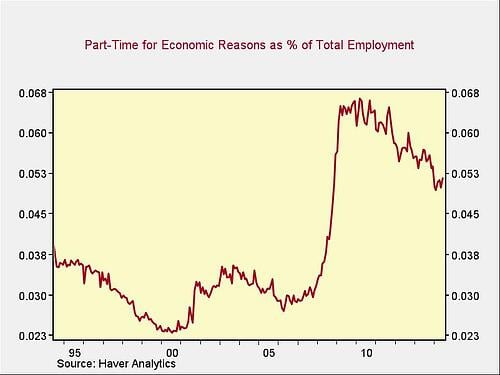 The chart above illustrates two points:

Part-time employment, while improving, is still above expectations, and that’s what’s fueling this meme. Even though conditions continue to improve, we certainly have a long way to go.

Per the second part of the argument, the decline in the unemployment rate is due to the fact that many people have left the labor force; were they included, the real unemployment rate would be much higher. These people are known either as “marginally attached to the labor force” (those who want a job and are looking) or “discouraged workers” (those who want a job but are not looking).

Here again, we see the same pattern. Looking at year-on-year changes, both categories are dropping at an increasing rate, per the following chart: 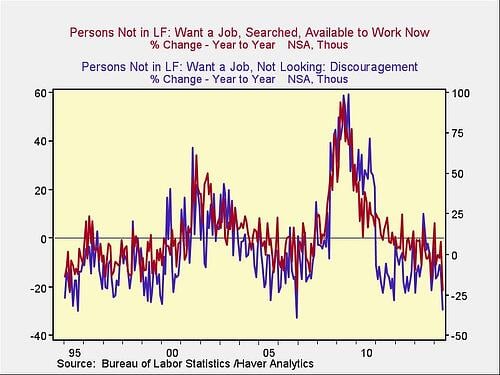 The absolute levels show the same declines, but we’re well above what are considered “normal” levels of the past 20 years. Although the improvements are substantial and real, we still have a long way to go.

Are these quality jobs?

The third part of the argument is that the jobs created are low-skill, low-wage, and low-quality—fast-food rather than, say, manufacturing. To start, let’s define what a “good job” is. Wages are the most obvious metric, so we’ll look at average hourly wages for different sectors from the Bureau of Labor Statistics.

Based on wages, let’s say Leisure and Hospitality and Retail Trade are the worst jobs (just numbers, not a value judgment), while Information and Financial activities are the best (definitely not a value judgment). Note that I’m excluding Utilities, as it’s a small piece of the pie. Now, let’s compare the growth rates of these four sectors. 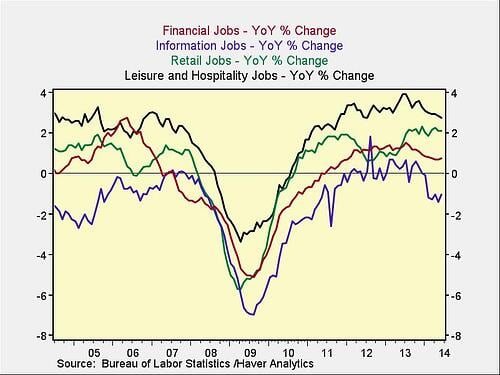 Two things strike me about this chart:

Once again, this points to the same conclusion: current trends are moving in the right direction, but we still aren’t close to what was considered normal in the past, especially for the higher-earning sectors.

Is full recovery on its way?

The data shows that the recovery is real, and that these are good jobs at good wages (or at least as much as they’ve ever been). We’re moving in the right direction, and picking up speed.

Even as job growth accelerates, though, we have a long way to go. Those who say that there are fewer good jobs available, and many who want a full-time job but can’t get one, are right. The recovery has been slow, and in many ways uneven, and the damage of the recession lingers.

That said, the improving data suggests that full recovery is indeed on its way. Economic growth comes through trends, and if the trends are positive (like they are now), it will simply be a matter of time. This isn’t to minimize the very real challenges we face, but simply to recognize that full recovery has to come from improving trends over time—and that is exactly what we now see.