Is Inflation on the Way?

I host a call for advisors’ clients every quarter, and one of the most interesting parts is the questions I get from participants beforehand. They’re invariably cogent, thoughtful, and helpful in defining what I should be talking about—and what I may be missing in my own view of the world.

A question that’s come up in preparation for my call tomorrow concerns inflation—is it coming? If so, when, and how bad will it be?

What the data tells us so far

Looking at the month-on-month changes for the Consumer Price Index as a whole, things seem contained, with inflation at levels typical for most of the past 10 years. 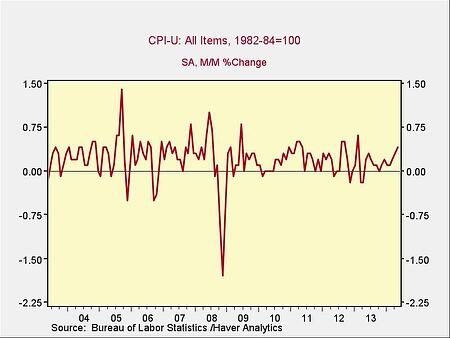 Before calling inflation warnings a false alarm, though, let’s move back a bit from the month-to-month changes, which can be volatile, and look at a three-month average. 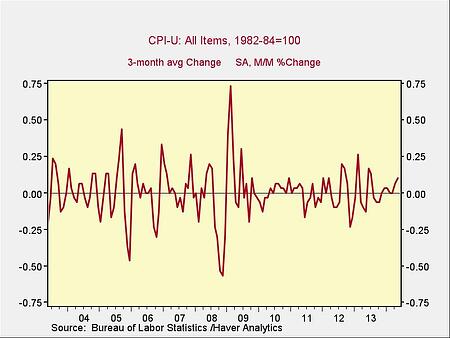 In most of the graph, there’s a rough balance between upward and downward trends; overall, we’re still within the normal range. But the most recent data suggests a possible acceleration upward—and warrants a deeper look.

Inflation creeping up in some areas

One of the largest components of the core price index is shelter, with rent at 31.7 percent. For owners, rent is estimated based on the rents of similar rental properties. Rents have been rising and vacancy rates decreasing, driving an increase in this component of the CPI—and signaling a further rise.

It’s hard to see from this chart, but the shelter inflation rate is now at a six-year high of 2.8 percent. 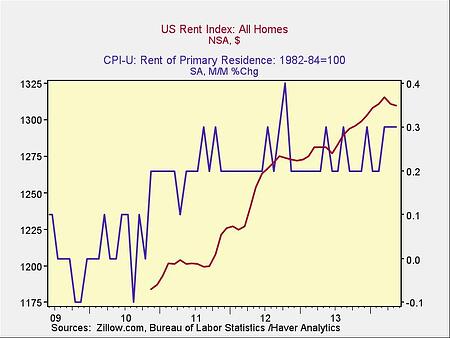 And shelter isn’t the only area to see an uptick.

The increase in inflation has hit both goods and services, suggesting it is widespread.

Another way of looking at this is from the top down, based on total money supply and velocity. While velocity shows signs of bottoming, money supply has been increasing for six months, after declining for several years. The combination of growing money stock and flattening velocity should act to further increase the risk of inflation.

Is the Fed watching closely enough?

None of this should spell panic. Inflation continues to rise slowly, and there’s no immediate problem here.

On the other hand, the Federal Reserve doesn’t appear to be taking sufficient account of the risk. We’re already close to the Fed’s target inflation rate, and there’s a real chance inflation could take off in a way that would prompt the Fed to raise interest rates sooner than anyone expects.

That’s something the market is not pricing in.