The big economic news this week—now that the stock market has calmed down—is the apparent rise of inflation. In fact, inflation does appear to be on the rise, with both the Consumer Price Index (CPI) and the Producer Price Index (PPI) showing faster growth in the past 18 months, as you can see in the chart below. We will be using the CPI for the rest of the discussion, given the relatively short span of the PPI data, but note that the two series have been saying the same thing. 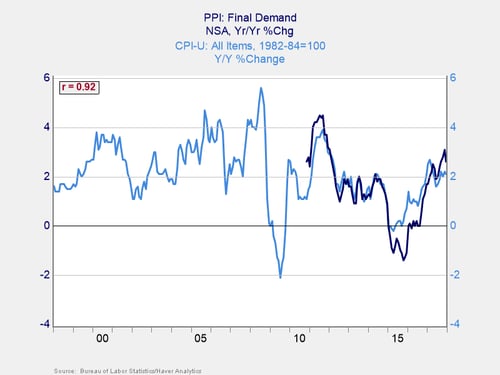 Before we really get going, let’s start with a basic point: we have seen a rise in inflation before during this recovery, only to have it drop back down. Any analysis and projections we do have to take this into account. So, keep in mind that this could be one more head fake.

That said, conditions do look different this time around and may be more conducive to inflation. The past three months, for example, have shown higher inflation rates. If annualized, they would take us to a 4-percent inflation rate, something we have not seen on a sustained basis since the last boom. Even if we don’t get as high as that, inflation is already above where it has been since the crisis—and looks likely to move higher. With the economy at or at least approaching full employment, with the dollar weak, and with capacity constraints looming, inflation will be harder and harder to avoid. This may be a head fake, but the real thing is coming sooner rather than later.

Why do we care?

The reason we care, as investors, is because over the past 40 years, interest rates have tended to follow inflation. There has been a great deal of talk about short-term rates and the Fed, but the real issue will be longer-term rates. These affect capital spending decisions, mortgages, car loans, and everything else, including stock prices. Short-term rates are important, but long-term rates are much more so. 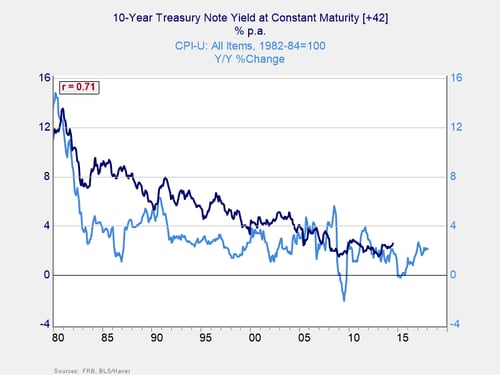 What about stock prices?

To take the next step, we have to consider the effects of longer-term interest rates on stock prices. Here, it gets a bit more complicated. History shows that what matters are not just interest rate increases, but increases from what to what.

At low levels, rate increases are generally positive for the stock market. Once rates breach a certain level, however, they become bad. This makes sense, in that low rates usually got that way because the economy (and companies) were doing poorly. As the economy (and companies) do better, rates gradually rise, reflecting faster growth. Eventually, things start to overheat, and rates rise further to reflect faster inflation. Higher rates due to faster growth are good for stocks, while higher rates due to inflation are not.

The market has it right

This gives us some insight into where we are right now. Inflation, while rising, is still low. Growth is accelerating and is likely to continue with the tax cuts and fiscal stimulus in the recent budget deal. As such, rates should be rising on faster growth—and are. Inflation, while on its way, is not yet in the trouble zone.

The market’s initial reaction to higher rates and inflation fears reflected concerns over inflation-driven rates. A deeper look at the data, however, shows that higher rates are more driven by growth. As such, the market has (at least at the moment) decided that higher rates are good, rather than bad. That will certainly change at some point. But, for the moment, I think the market has it right. We do need to keep an eye on this, though, because the growth spurt is likely to be short, while inflation pressures will keep rising. This will be one more rising risk over the next 12 to 18 months, but not today.