How to Sell High and Buy Low

After Wednesday’s post on why many investment portfolios are doing badly, the natural follow-up question is, how do we get them to do better? Everyone, me included, would like to be able to buy into asset classes that will do well and avoid those that won’t.

If only it were that simple. 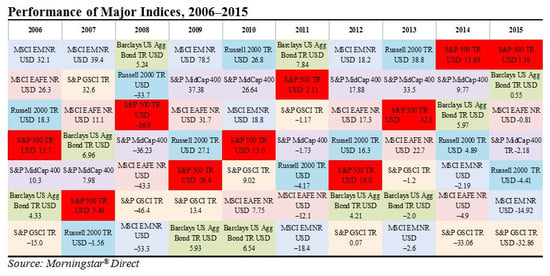 With so much bouncing around, it’s hard to predict what will do well. Buying what worked last year has generally been a bad idea, as the chart shows. Buying what did worst last year—although it doesn't work regularly—is a much better bet than buying what did best.

The key to successful investing, as the cliché goes, is to buy low and sell high. Our goal is to buy the assets that do well and not buy those that don’t. Is it possible to combine these ideas and get better results? Over the long term, it can be.

When you regularly rebalance your portfolio, you are both selling high and buying low and shifting your investments from those that are less likely to outperform to those that are more likely to do so.

In other words, you would have done exactly what every investor wants to do.

It doesn't always play out that way, of course. But simply by looking at the chart, you can see it works more often than not. Over time, this strategy can add up to significantly better results than trying to chase last year’s winners.

Even better, if you diversify among all of the asset classes, you minimize the effects when one does something unusual. For example, when U.S. bonds underperformed in 2009–2010 and 2012–2013, having a diversified portfolio helped minimize that underperformance, positioning investors to benefit from the relative gains in 2011 and 2014, without suffering as much of the damage of the previous down periods.

Making volatility work for you

Unfortunately, the simple strategy of maintaining a diversified portfolio with regular rebalancing is surprisingly hard to execute. There is something deep inside us that protests selling a winner to buy a loser. It is counterintuitive, psychologically difficult, and unpleasant. And, as we discussed on Wednesday, it doesn’t work every year, which makes it even harder to stay the course.

Right now, for example, based on 2015’s results, a rebalance would involve selling large stocks in the U.S. (S&P 500) and developed markets like Europe and Japan (MSCI EAFE), along with U.S. bonds, and buying into small U.S. stocks, emerging markets (MSCI EMNR), and commodities (S&P GSCI).

This might seem scary on the face of it, but that’s kind of the point. Comfortable assets get expensive. Scary assets are cheap because no one wants to own them.

Which brings us back to the psychological challenges of diversification and rebalancing. Yes, it seems to defy logic. Yes, you don’t really want to do it. And yes, results are not guaranteed on a year-to-year basis. It is hard to do.

In fact, the only real argument for doing it is that, over time, it can work.