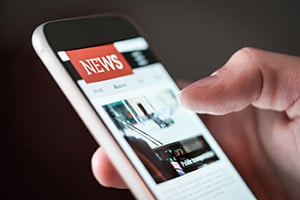 We are now entering the phase of the market cycle where worries start to proliferate. We’ve already talked about Evergrande, supply chain issues, rising interest rates, and so on—and the risks for all of these things are real. As the situations evolve, though, each of these categories and others will present themselves in different ways. For example, looking at China, we have Evergrande, the demographic rollover there, trade and competition issues with the U.S., and many more. Even as one issue (Evergrande) starts to recede from investor consciousness, others will rise again.

What this means for us right now is that we can expect to see more scary headlines. The risks and the worries are not going away. At the same time, we need to be conscious that the headlines will change much faster than the risks themselves. Evergrande, for example, is still being worked out—and is still a threat—even though the headlines have subsided. On the flip side, the Evergrande issue was just as worrisome before it hit the headlines. The headlines were not (and are not) good indicators of the actual risk.

Beyond the risk level, the other thing that we need to be aware of is the time horizon around the headlines. I got a question this morning about Chinese demographics and how they affect markets. This is a real problem and will be a bigger one down the line. But it is the classic getting run over by the slow-motion steamroller, as in the Austin Powers movie. The time frame does not necessarily correlate with the headlines. And this gives us a good start on how to recognize how big a headline risk really is.

When a scary headline pops up, what should we do? Should we react? What makes a headline risk a real one? And how can we tell?

Is the Risk Immediate?

The first question is whether the risk is immediate. Population shifts, for example, take place over decades. They’re not immediate, so are likely to adjust slowly, and are not worth worrying about today. Evergrande, on the other hand, was immediate and urgent. Evergrande passes the first test.

The second thing I look for is whether this issue is a surprise. Here, too, the population headline fails the test. Evergrande passes it, in one sense, but in another it doesn’t. Chinese indebtedness and the problems with the property sector there are an old story. This is a sudden development—and a surprise that way—but it’s a sudden development in an old and ongoing story. Let’s give this one to Evergrande, with the caveat that it doesn’t pass entirely.

The third thing I look for is a significant size, in context. Any small bankruptcy is just that, but a big one is different. As the saying goes, if you owe the bank $100, then the bank owns you. If you owe the bank $100 million—or, in this case, hundreds of billions—you own the bank. This is where the Evergrande risk starts to break down, after passing the first two tests. The sheer size of Evergrande, the same thing that makes it a potential systemic threat, also makes it more likely to be resolved without systemic risk. Just as important, though, as big as Evergrande is, it is still small in the larger context of the Chinese financial system and economy. It is big enough to matter, but it’s small enough to be solved. Big problems, if solvable, are often paradoxically more likely to be resolved, simply because they are so visible. This is where the Evergrande headlines start to break down as a systemic risk.

This brings us to the last point, which is that by the time something shows up in the headlines, it is either a real threat or, more likely, something that is already well on the way to being solved. Note, for example, how little fuss there has been about Evergrande in the past week or so. Because it is a large and well-known problem but an isolated one, the lenders and the Chinese government are working on a quiet resolution, one that will not shake either markets or the Chinese economy. In this case, what we saw was a headline that passed the first two tests—and generated a lot of worries—but did not pass the final two, suggesting that it would go away fairly quietly. And, so far, that is just what we see.

If we look at the opposite of these, we can see what a real potential crisis might look like. Is the problem immediate? Is there time to work it out? If not, then it could indeed get worse. Second, is this something that had been foreseen? If not, then any workout needs to start from scratch, which makes it both harder and riskier. Third, is this big enough to get noticed, but small enough to be solved? If yes on one and no on two, then risks rise sharply again. And finally, is this already being solved? If so, the risk drops again. If not . . .

I think this is a useful framework for keeping our desire to panic in check. Headlines are designed to be scary, to make you feel you need to read the story and all the follow-ups. They are not designed to really think through the real risks and what they might mean.

Tomorrow, we will look at the great financial crisis of 2008 through this framework and compare that with Evergrande for the differences and, possibly, the similarities. I hope you will find it interesting.