Last week's strong employment report settled what I saw as the major short-term risk here in the U.S. Meanwhile, the biggest international risks—Greece and China—continue to make headlines, but the pot isn’t boiling over yet.

For the third time in six months, China is cutting interest rates in an attempt to revive its economy, reflecting a heightened level of concern that growth just isn’t coming back.

By cutting interest rates, China hopes to spur more borrowing in order to drive economic growth. This strategy has worked in the past, as you can see below. More credit has been steered toward more investment. Now, however, China is trying to steer growth away from investment and toward consumption. 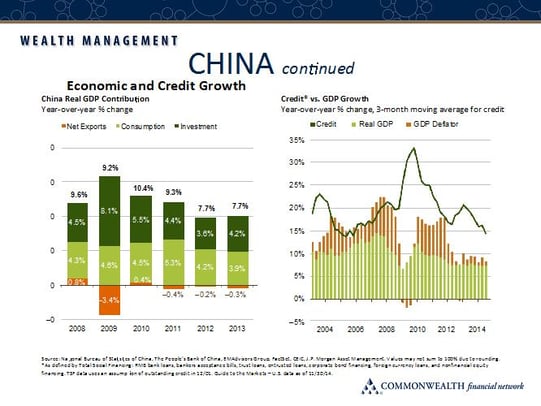 Two problems are apparent in the slide above:

In 2004 and 2009, the Chinese government cranked up credit creation, and GDP growth followed shortly thereafter. In 2012–2013, the government tried to do the same thing, but GDP growth continued to decline.

China’s problem is that the usual policy tools aren’t working like they once did, but there really aren’t any others. That’s why it’s cutting interest rates some more. It remains to be seen whether this tool is played out. If it is, China may have to get used to much slower growth, something it can't really afford given its existing debt level.

In other news, Greece looks like it will make its next payment, but the real problem—that it simply cannot cover its debts—remains. We can kind of see how the Greek situation will evolve from here; the only real question is how much damage will be done in the process.

Most interesting is what a Greek exit would mean for the rest of the eurozone. There’s a good chance it could end up shattering it, but for very different reasons than what most commentators think. We’ll talk about that tomorrow.