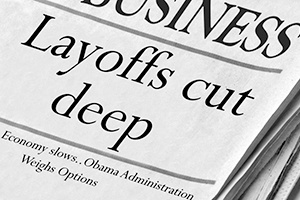 As expected, the initial jobless claims report—the one that shows how many people have been laid off and are newly applying for unemployment assistance—was a shocker this morning. Three million people lost their jobs and applied for unemployment last week. This is by far the highest number ever, with the previous record at just under 700,000 in 1982.

The actual total is probably even worse. Reports around the country indicate that state unemployment offices are overwhelmed, and online systems are crashing under the demand. There are likely many people who have lost their jobs who simply have not had time to get into the system. Expect another spike in claims next week, and perhaps for the next several weeks.

This report is the first wave of the economic damage we will see from the lockdowns. People can’t go to work, people can’t go shopping, and large sections of the economy (airlines, hotels, restaurants, and most retail stores) have simply shut down. These are the direct job losses that are now showing up. Over time, they will be followed by the indirect jobs losses in companies that support these companies. It will be a long process.

The net effect here will be to take the economy into a recession in the second and third quarter. We will see a series of scary economic reports: next week’s monthly jobs report will be very bad, and when the economic growth for the first quarter is released, expect more bad news. The second quarter will be worse, and there will be multiple less prominent reports that may also shake markets.

The surprising thing is that, despite all this news and this morning’s terrible job loss numbers, financial markets seem to be rallying. How can that be happening in the face of both the existing and the pending bad news? Simply, markets were expecting a depression, and now that outcome looks much less likely.

This morning’s job loss numbers are certainly consistent with that expectation, but some things have changed since markets dropped hard. The first is that governments at various levels have taken actions to control the spread of the pandemic. It is true that case counts continue to rise, but the rate of growth has moderated—and may be declining. The second is that the Fed has gone all in on stabilizing the financial system and making financing accessible to businesses that need it. The third, and biggest, is that the Congress and White House have now agreed to a deal that directly injects cash to workers who can’t work and to businesses that have lost their customers. These are all programs that directly address the conditions that could take us into a depression. They have all been put into place quickly—before that depression can really take hold.

In other words, while the conditions for a depression may be in place, the policy response to prevent that depression is also in place. While some damage and a recession are certain, a depression is now likely avoidable. As such, markets have some room to recover, since the worst is now much less likely. Policy action has averted the worst case, and markets are reflecting that fact.

There are two things to keep in mind here. First, this is an elective recession, driven by the government lockdown policy. There are good medical reasons for the policy, but it is causing serious economic damage. Second, because this is a policy-driven recession, policy can also significantly mitigate the damage—which is what is now happening. This is a much more positive picture than what markets were expecting a week ago.

Economy and markets are not alone

Of course, the problems are not over. There will be mistakes and new issues, and things will potentially get worse than markets now expect. At the same time, whatever happens can now be expected to generate an offsetting policy response. The economy and markets will not be left to sort out a policy-driven recession on their own.

And that may be the best takeaway from this morning’s job losses. They are not random. Rather, they are an unfortunate cost of the policies required to solve a bigger problem. Recognizing that fact, the government is moving to help solve the consequent economic damage with the stimulus package. In both cases, government at all levels has proved to be capable of both understanding a problem and acting to solve it. In an era of political dysfunction, that is really great news.