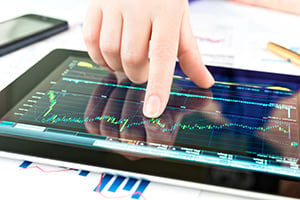 As expected, we saw infections due to holiday travel showing up in the data over the past week, with case counts rising to new highs. But by week’s end, there were signs that case growth was peaking as the holiday travel effects started to fade. We could now be approaching the peak, although the events in Washington on January 6 are now presenting a risk of another wave of travel-induced infections. We should know in the next week or so if that is the case.

The economic news also continued to deteriorate, but here too we saw positive signs. Confidence and spending were down as lockdowns widened around the country. On the positive side, the federal government has now passed a stimulus program that should help support the economy over the next couple of months. And with the new administration, more stimulus is likely.

Christmas Travel Cases May Be Peaking

New cases per day. The most obvious metric for tracking the virus is daily new cases. We saw a data distortion lull in the aftermath of the Christmas holiday, as we did with Thanksgiving, with the drop due to slower data reporting. Now, however, case growth has moved back up to new highs as the holiday travel surge shows up. With that said, we are now two weeks past the new year. Much of the travel infections are likely already in the system, which may be shown by the infection peak in the past couple of days. While risks remain—the events of January 6 in Washington could result in another round of infection growth—we may be getting close to the crest of the third wave.

New daily infection rates were 236,631 on January 13, down from 265,105 a week earlier. The seven-day average number of new cases per day was 250,092, up from 229,523 a week ago, a smaller increase than in the prior week. While case growth remains high, the good news is that the rate of increase looks to have slowed. If this trend continues, we could see the third wave peak in the next couple of weeks, as the post-holiday surge fades. 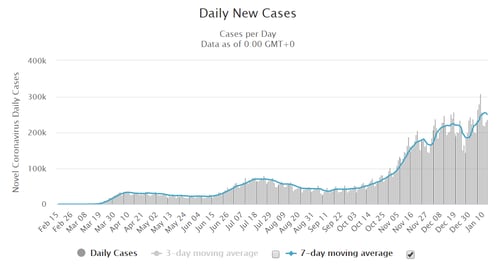 Death rate. The death rate reporting is also showing the same trends. This is a lagging indicator and runs from six to eight weeks behind case growth. As such, recent increases in the death rate reflect infection growth in late November and early December. On a seven-day moving average basis, daily deaths were at 3,419 on January 13, up from 2,702 in the prior week. As the number of new cases has spiked since Christmas, we can reasonably expect death rates to increase substantially over the coming weeks. 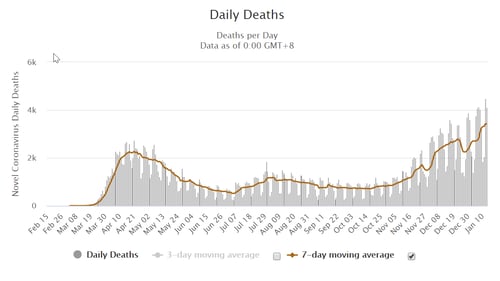 Testing. Finally, we see that the testing news is showing improvement. Daily testing rose again, after a pullback, and positive rates have started to decline. This could be a leading indicator of improvements. 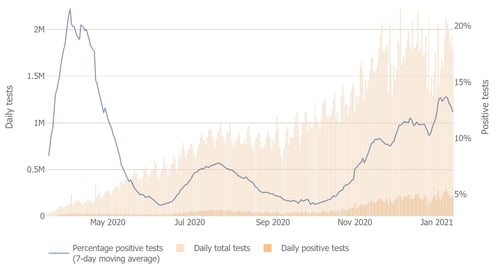 The bottom line is that while the data has continued to get worse, driven by holiday travel infections, there are signs we are through the worst of it as infection growth has slowed and positive testing rates ticked down. We could therefore see more improvement in the next couple of weeks. Along with the deployment of vaccines, we may be approaching the end of the beginning. While the pandemic may well look worse over the next couple of weeks, the medium- and longer-term pictures look brighter.

Jobs and consumers. Government-mandated shutdowns in response to the deterioration of the medical situation, along with changes in consumer behavior, have hit the economy hard in recent weeks. Job growth went negative for December, and layoffs have risen again. Most affected are workers in the leisure and hospitality industries. With the employment market down, consumer confidence has softened further, leading to a sharp drop in retail spending as reported for last month. Overall, the data suggests that the third wave has now hit a point where it is acting as a significant drag on the economy, and that will last until medical conditions improve. 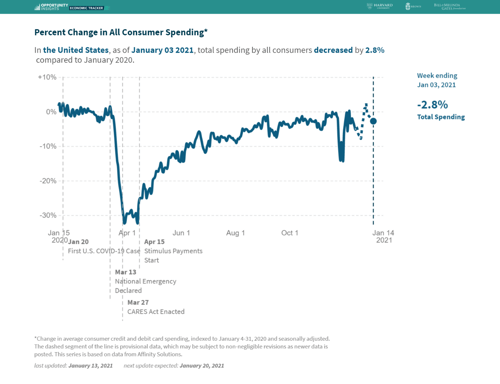 The real question, going forward, is how durable this recovery is. Much of the data has remained solid despite the ongoing third wave, suggesting substantial resilience. The question is whether the accelerating damage will reverse the economic recovery before the vaccines can be widely deployed. Here, the fiscal stimulus package passed by Congress should help bridge that gap. It will provide the kind of boost that supported growth in earlier waves, especially in the low-wage populations most at risk, which should get us through until vaccines start to make a difference. At that point, we should start to see consumer confidence and spending bounce back, as we saw after previous waves. While the risks are real, the federal stimulus will substantially mitigate the worst of them.

Markets continued to rally and hit all-time highs again. Reasons this week are both the existing federal stimulus package and the expectation of more federal stimulus shortly. Both medical and economic risks now look to be close to peaking, and it is reasonable to conclude we are at the end of the beginning of the pandemic. Between the short-term cushion from the stimulus and the expectation that vaccines will normalize the medical risks in 2021, markets are clearly looking for a much better 2021—and prices are responding.

While we are not yet through the third wave, there are signs a crest may be approaching as holiday travel effects fade. Similarly, while the economic damage continues, the federal stimulus should help mitigate the damage until the medical risks decline. The good news is that vaccines are now starting, and there are signs that policy is starting to succeed in containing the virus. So, despite the short-term damage done by holiday travel, the medical risks may be within weeks of peaking.

Similarly, while the economic news continues to be worrying, the federal government’s stimulus bill should provide enough cushion for the economy to keep growing until the medical risks are more contained. The most likely case for the next couple of weeks appears to be stabilization of the medical news, with possible slow improvement. Similarly, the economic data will remain soft in the short term but should then show improvement as the stimulus package takes effect. Markets will likely keep bouncing around on new developments, so expect more volatility in the short term.

In the longer term, the good news is that vaccines are now rolling out increasingly quickly. In a few months, we should be approaching the end of the pandemic when the economy can normalize and start to really grow again. The stimulus package should help the economy bridge the gap to that point. Despite the headlines we are seeing today and the real risks, we are making progress. We will get there—but it will just take a bit longer.