Yesterday was the first time that the new chairman of the Federal Reserve, Jerome Powell, testified before Congress. There has been quite a bit of coverage regarding what he said both in his initial statement and in response to questions. Here, I want to focus on just one sentence. After noting that “the FOMC [Federal Open Market Committee] routinely consults monetary policy rules,” he concluded with what I think was the most important sentence of the day: “Personally, I find these rule prescriptions helpful.” He then referenced a section in the Fed’s monetary policy report that goes through some of the more common rules and how the Fed applies them.

Why should you care?

This statement represents a significant departure from how the Fed has been run since the financial crisis. Over the past 10 years, monetary policy has been “data dependent,” with Fed officials making decisions based on their best judgment—often in contravention to what policy rules, developed in calmer times, would indicate. In effect, “lower for longer” has been the result of the data-dependent decisions, while most of the rules would have pushed up rates far faster and higher. Essentially, the justification for the data-dependent approach (with lower rates) was and is that the rules were not applicable since the conditions were sufficiently different from when those rules were developed.

In the rest of his testimony, Powell made the case that the economy was in good shape. He also indicated that rather than being in a state of crisis, the economy had largely healed—and was approaching something we used to call normal. If that is true, though, then a more normal economy should require a more normal interest rate policy; thus, the old rules are now applicable again. This is, I believe, the point Powell was deliberately making by including that sentence in his formal statement. There is no way to miss it: the old rules are coming back.

What does this mean in reality?

In December 2017, the Fed raised the base interest rate (i.e., the federal funds rate) to a range of 1.25 percent to 1.50 percent. Another increase of a quarter percentage point is expected in March (to between 1.50 percent and 1.75 percent), and markets are expecting another one or two increases this year. This is the base case: what markets are expecting and what stock prices—among other asset values—are based on. But what would it mean to go to a rule-based system?

The return of the Taylor rule?

There are a number of potential rules that can govern monetary policy. But one of the best known is the Taylor rule, developed by John Taylor of Stanford University. It is so well known, in fact, that it has its own Wikipedia page and is tracked on many financial data services. 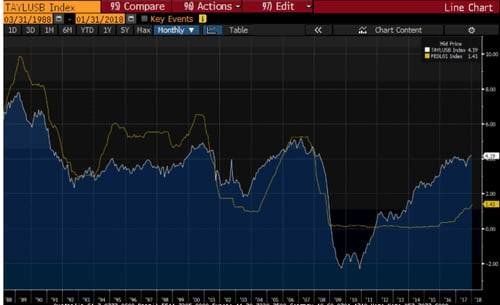 In the chart above, you can see that until the financial crisis, the Taylor rule was quite close to the actual rates set by the Fed. After the crisis, the two diverged, with the rule indicating much higher rates than the Fed actually put in place. Right now, the Taylor rule is showing that the federal funds rate should be at more than 4 percent—almost 3 percent higher than rates actually are.

That is a big gap, and one that—if you believe times are close to normal and interest rates should be as well—needs closing for the health of the economy. This, I believe, is what Chair Powell was signaling in calling attention to the fact the he believes rule-based monetary policy can be helpful. For us as investors, it also means that the upward trend in rates is likely to continue and may well accelerate.

The gap between what the market is expecting and what Powell may be signaling is, therefore, something we need to keep an eye on. One of the major supports for stock prices, in particular, has been low interest rates. The current high valuation levels largely depend on low rates continuing. A move back to normal—in the economy and in interest rates—may well drive a return to normal (which is to say lower) stock valuations as well.