August’s data was mixed, as improvements in business and consumer confidence were offset by a flattening yield curve and jobs numbers that were weaker than expected. These results were mildly disappointing. But the overall positive trends and, in particular, the high levels of confidence point toward faster growth toward the end of the year. 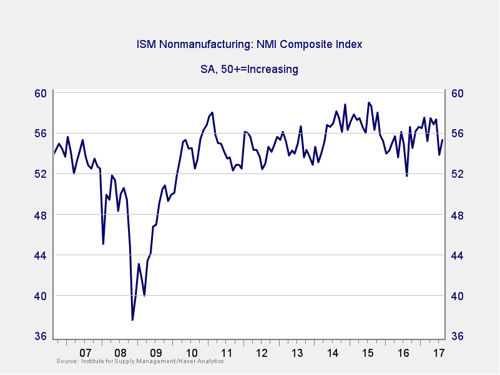 After a surprise decline in July, the ISM Nonmanufacturing index rebounded in August—in conjunction with a similar pop in the ISM Manufacturing index. These results suggest that business confidence remains at healthy levels across the board and that last month’s decline in the service index was noise rather than something worse. Given both the rebound in August and the fact that the index is at a healthy level, this indicator remains a green light. 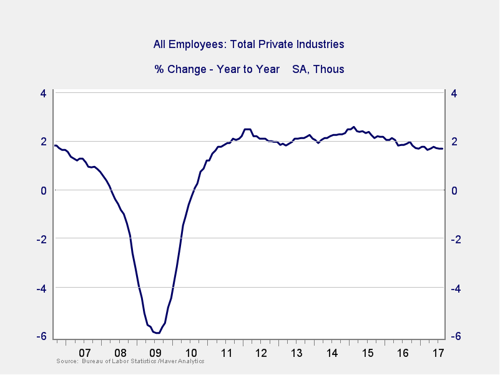 August job creation came in slightly lower than anticipated: 156,000 new jobs were added against expectations for 180,000. This miss disappointed market watchers, but the overall employment situation looks positive. Unemployment and underemployment rates remain near post-recession lows, and the annual job creation figure continues to be healthy.

Because this is an annual figure, the changes are slower and smaller than those we see in more frequently reported data. Despite the volatility of employment growth, this indicator remains a green light. 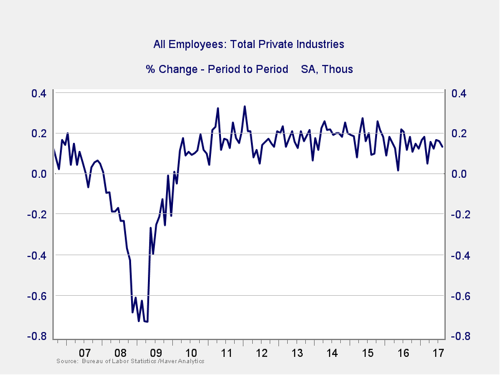 The monthly job creation number was weak, as noted above. Also, the underlying jobs data was disappointing, as wage growth and average hours worked both missed expectations. Structural features of the market may be causing much of this slowdown, however, as the number of unemployed workers per job opening sits near its lowest level ever, and layoffs remain low.

Given the positive big picture, the strength of recent job creation, and the fact that August’s number was not all that bad (although disappointing), this is worth watching but does not really change the conclusion. One weak month does not make a trend. With job creation still well above problem levels, this signal remains a green light. 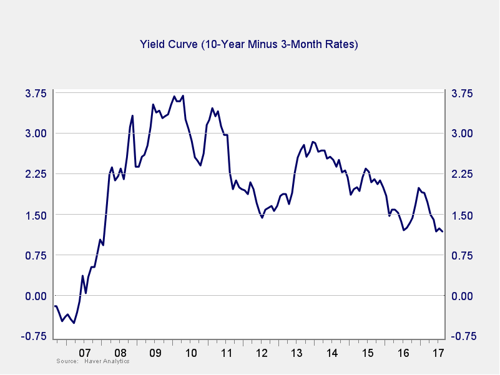 The spread between the 10-year and 3-month rates has dropped to the lowest level since the financial crisis, but it appears to be stabilizing. As such, and since the spread remains well above the trouble zone, we are leaving this indicator at a green light but will continue to monitor it. 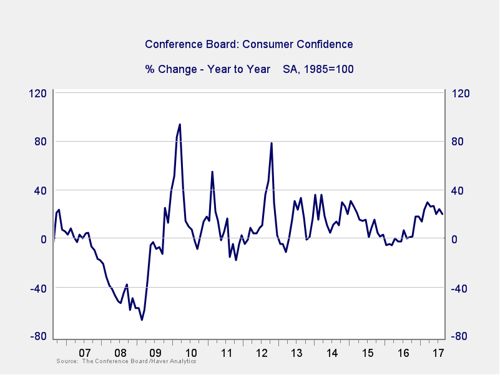 In August, consumer confidence increased for the second straight month following decreases in the previous three months. This measure now sits at its second-highest level in 16 years and shows no signs of slowing. At the same time, the change in confidence over the past year (which is what we actually track) remains at a very healthy level. The high level of consumer confidence and continued growth is a positive signal for the economy for the rest of the year, leaving this measure at a green light.

The improvements in confidence for both consumers and business are positive factors here, and they largely offset the weakness seen in job growth. In addition, the possible stabilization in the yield curve reduces immediate risk. Overall, conditions remain favorable, and economic risks are well contained.