Despite the impact of the hurricanes (in many respects, because of them), September’s data came in surprisingly positive. The headline figures were certainly affected by the storms, but the underlying details remained solid.

For example, business confidence rose sharply, but some of that improvement likely resulted from technical factors around how the indices are calculated. At the same time, other supporting data for that series was positive, suggesting that much of the improvement was real. An example on the other side is job growth. This month, it dropped for the first time in years, but the supporting data—especially wage growth and participation—was stronger than expected.

Overall, this month’s data was supportive of continued expansion, despite any hurricane-related distortions. Of course, we should not make too much of one month’s data, but the larger trends remain favorable. The only real question remains, how much so? 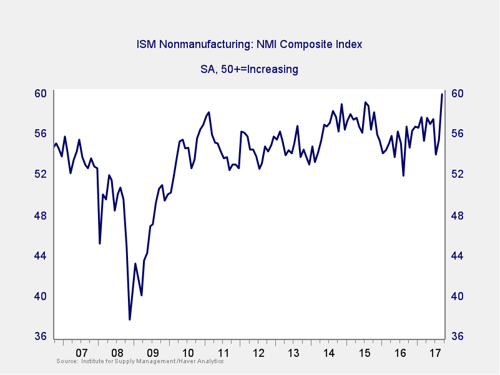 After a surprise decline in July, the Institute for Supply Management (ISM) Nonmanufacturing index bounced back for the second month in a row. The recent increase brings this measure of business confidence to a post-recession high, and the Manufacturing index had similar gains. These are very strong numbers. As noted above, some of this improvement may be due to measurement issues. But the supporting data was positive, so much of the improvement is likely to be real. Going forward, these high levels of confidence should help support accelerated growth, leaving this indicator a green light. 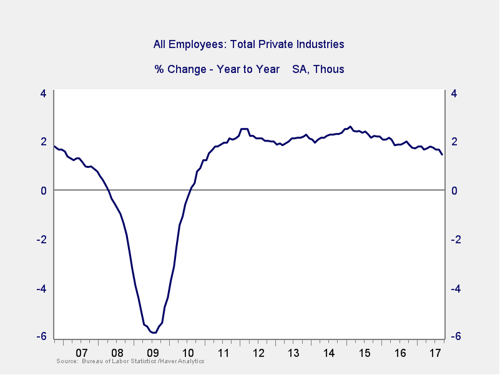 September job growth came in significantly below expectations: 33,000 jobs were lost against expectations for a modest increase of 80,000. This disappointing figure was driven by a slowdown in hurricane-impacted regions and is not expected to last, based on experience with past storms. Just as with the ISM surveys, despite weaknesses in the headline number, the supporting data came in quite strong, with faster wage growth and higher participation. This suggests that the decline was due to the storms. 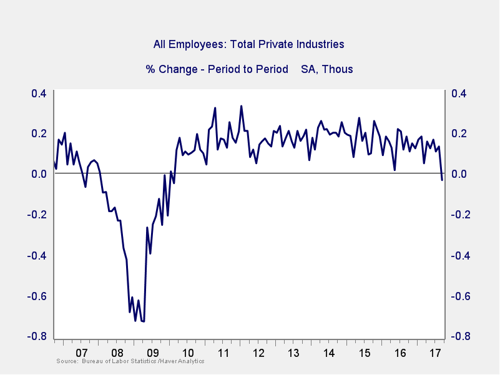 As noted above, this was the first monthly decline in jobs in years. This drop might raise concerns, but it is consistent with previous storms and likely to reverse in coming months. The supporting data in September was much better than expected across the board, with both unemployment and underemployment rates declining and wage growth rising. Given the strength in these underlying figures, plus the likelihood that the decline was due to the storms, this indicator remains a green light. 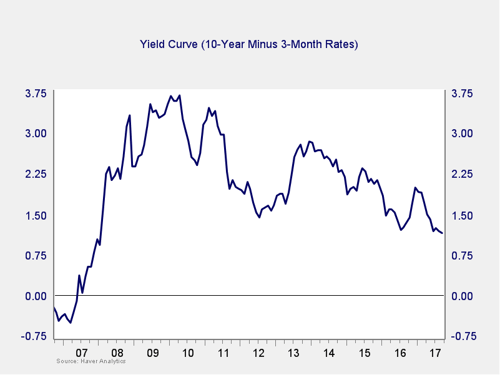 The spread between the 10-year and 3-month rates has dropped to the lowest level since the financial crisis, but it appears to be stabilizing. As such, and since the spread remains well above the trouble zone, we are leaving this indicator at a green light but will continue to monitor it. Recent increases in the 10-year rate suggest the spread might widen out in the near term, which would be a positive sign. 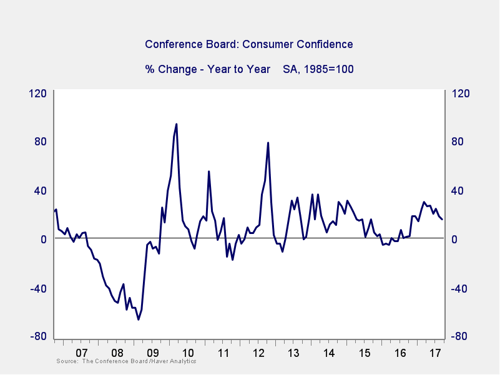 Consumer confidence decreased slightly in September; however, this was largely due to the impact from the recent storms. This measure still sits near 16-year highs, and this slight decrease is nothing to worry about. In addition, the year-on-year change remains at strong levels, so this indicator remains a green light.

The continued strength in consumer and business confidence is a significant positive factor and largely offsets the likely temporary weakness seen in job creation. In addition, the possible stabilization in the yield curve reduces the immediate risk. Overall, conditions remain favorable, and economic risks are well contained. 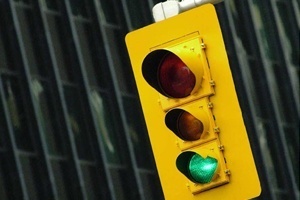