After a difficult quarter, April’s data showed signs of meaningful improvement. Job growth bounced back, easing a major concern. Plus, consumer confidence improved, which should help growth going forward. On the other hand, business confidence dipped further, and the yield curve remains close to a risk level.

Overall, there was real improvement. But the risk level remains elevated, and signs of slowing growth persist. 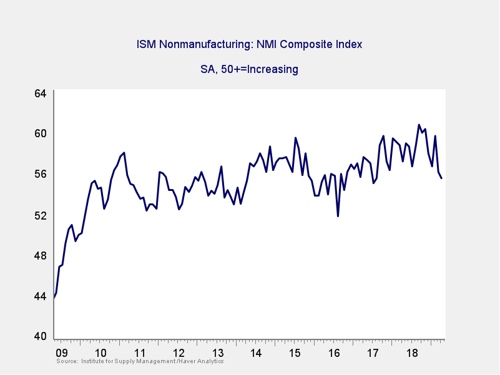 As a representative sample of the largest sector of business, this is an important leading indicator. It dropped back further last month, taking it to the lowest level in almost two years. Although it remains within expansion territory and within the range of the past two years, it is nearing the bottom of that range. In addition, the manufacturing index has recently weakened, which adds color to this reading. Although conditions remain expansionary, the risk level seems to be rising. As such, we are taking this indicator to a yellow light.

With a significant upside surprise to job growth in April, private employment growth year-on-year steadied, after a pullback on February's weak job creation number. It remains at healthy levels (at or above those of the mid-2000s), suggesting that the decline in the growth rate has stabilized for the moment and may have reversed. Because this is an annual figure, the changes are slower and smaller than those we see in more frequently reported data, but the trend continues to be positive. 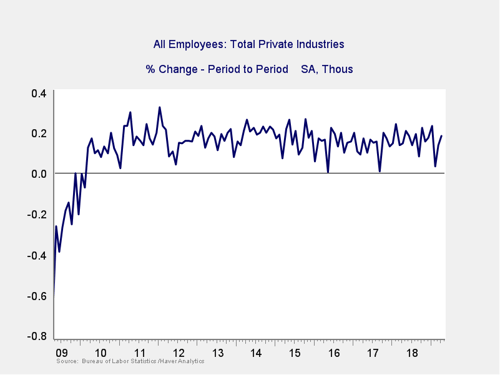 After a strong March, April’s job creation was both very strong and well above expectations. This result has more than offset the weak February number. Further, this rebound indicates that employment growth continues at a steady pace and alleviates some of the concern for this indicator. Total employment growth remains healthy, within the range for this recovery. 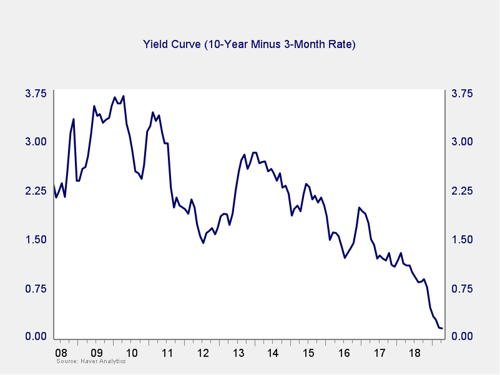 After a brief inversion lasting only three days, rates normalized last month, leaving the spread positive again. As you can see, the brief inversion doesn’t even show on this monthly chart. As such, it does not appear to be a recession signal, but it is a risk indicator. Further, the trend over the past couple of months has changed from positive to negative, and it has now extended long enough to suggest this is likely a fundamental negative shift. Therefore, we are keeping this indicator at a yellow light. 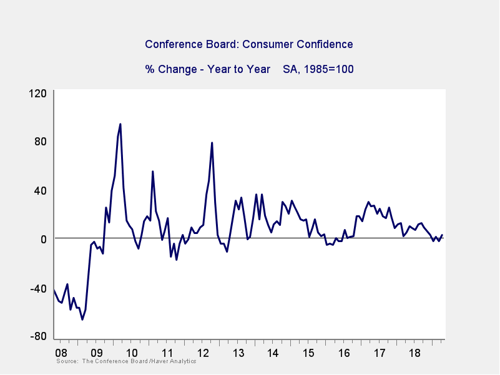 Confidence bounced back further in April, taking it close to recent highs and keeping the year-on-year change above the zero level, leaving it well above problematic levels. With the absolute level of confidence recovered and with the annual rate flat, this indicator has improved. But the recent trend of a flat year-on-year change, rather than an improvement, suggests risks remain. As such, we are leaving it at a yellow light.

Despite a bounce in job growth and higher consumer confidence, we did see a deterioration in business confidence and continued indicators of risk from the yield curve. Still, all the risk factors remain well out of the red zone.