Once again, it’s time for our monthly update on risk factors that have proven to be good indicators of economic trouble ahead. The news this month is good. Some potentially worrying downward trends have continued to reverse, suggesting that the weakness of the past couple of quarters is abating. Even our first yellow light—changes in consumer confidence—is closing back in on green-light territory, though it’s not quite there yet. We are also seeing encouraging signs of stabilization in other areas, such as the yield curve indicator.

Although concerns still remain, things are getting better, and the risk level continues to drop. With many of the signs of a slowdown improving on a forward-looking basis, the overall view remains positive—more so than it has for the past couple of months. 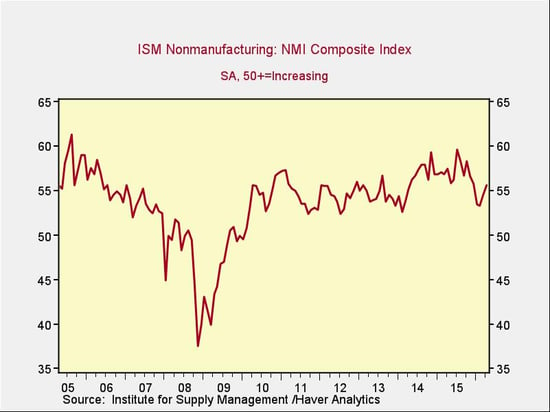 This metric bounced back for the second month in a row—and by more than expected—supporting the idea that the service sector has stabilized after being pulled down by weakness in manufacturing. This indicator is nearing the levels of 2014 and 2015, so we can still expect continued business and employment expansion (and quite possibly even a recovery to higher growth levels). 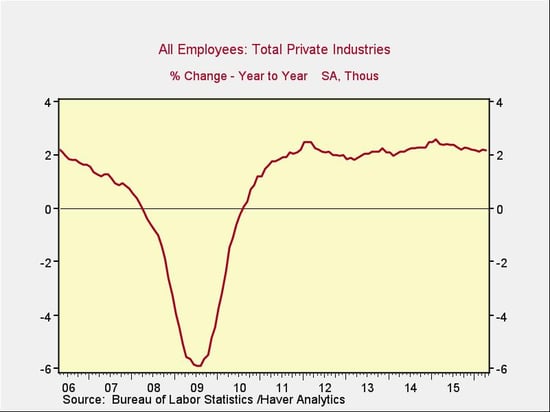 Private employment growth year-on-year remained roughly level, despite a disappointing headline jobs number for April. Job creation, at an annual percentage rate, remains strong (at or above levels of the mid-2000s) and looks like it may be stabilizing. Because this is an annual figure, the changes are slower and smaller than those we see in more frequently reported data, but the trend continues to look healthy. 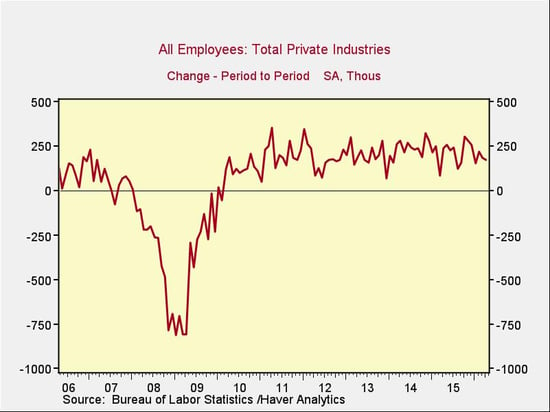 These are the same numbers as in the previous chart, but on a month-to-month basis, which can provide a better short-term signal. April’s job creation was down compared with March and fell below expectations, but the details suggest the overall report is stronger than the headline number would indicate. Total employment growth—particularly growth in labor demand—continues to be healthy, within the range for this recovery. 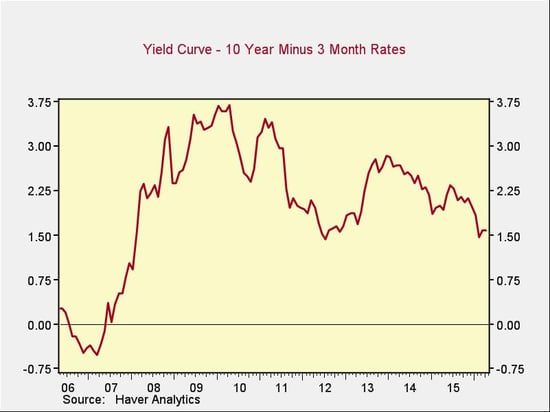 Rates for the 10-year Treasury ticked up slightly over the past month while 3-month rates dropped slightly, and the spread between long-term and short-term rates widened accordingly. The spread remains at healthy levels, and over the past couple of months, the trend may have started to change from negative to positive. It's too soon to be sure, but the continued recovery is a positive sign. 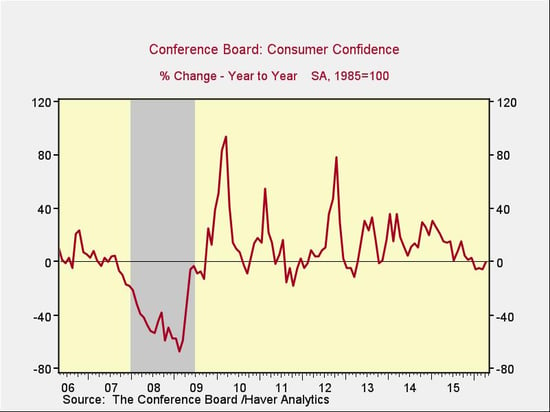 Consumer confidence decreased slightly this month, but due to base effects, the year-on-year growth rate increased slightly, bringing the year-on-year change back to even. This is the third year in a row that we’ve seen a difficult first quarter, and the changes in confidence reflect that. By moving back to even, the year-on-year growth rate suggests that recent weakness was to some extent seasonal and that the risk from this metric continues to lessen. Overall, the indicator is moving closer to a green light, but it’s not there just yet.

For the second month in a row, the most worrying area (consumer confidence) has shown improvement, while the other indicators have either remained healthy or continued to improve. Recent downward trends seem to be breaking, and forward-looking indicators are still positive.

Although a continued slowdown remains possible, the data suggests that it may be lifting. One positive fundamental is the ongoing strength of employment, as supported by the bounce back in the ISM Non-Manufacturing Index. Overall, although risks certainly remain, they appear less threatening than they did last month.

On balance, current conditions still warrant a green light for the economy as a whole. 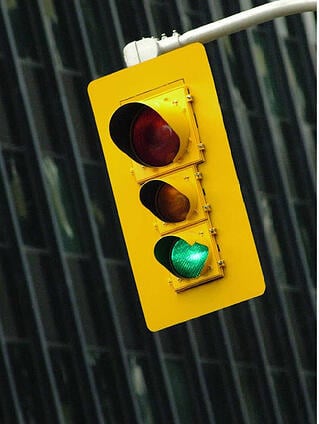