December’s data remained solid on an absolute basis, suggesting ongoing growth into 2018. With job growth showing signs of a slowdown and consumer and business confidence exhibiting signs of topping, however, the momentum of late 2017 may be fading. Fed policy remains stimulative, although less so than in previous months, but pending expected rate hikes may also start to erode that momentum.

Overall, this month’s data indicates continued expansion but also contains signs that the end of the cycle is getting closer. As such, while recognizing the good news, we still need to keep an eye on the risks. 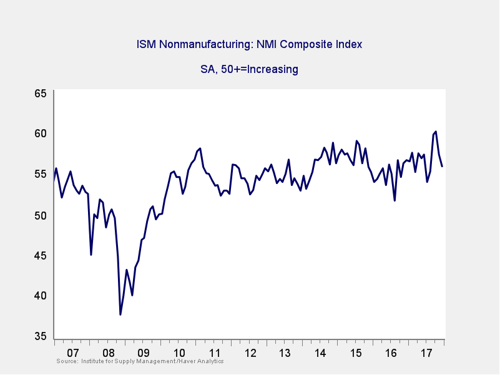 Against expectations of a small increase, the Institute for Supply Management (ISM) Nonmanufacturing index pulled back further from the post-recession high of two months ago. The decline, to 55.9, was a surprise and takes the index back to levels of the past 18 months. While this remains an expansionary indicator, the pullback suggests that growth is less likely to accelerate in 2018. Going forward, these levels of confidence should still support continued growth, leaving this indicator a green light. But further declines would suggest the momentum is fading. 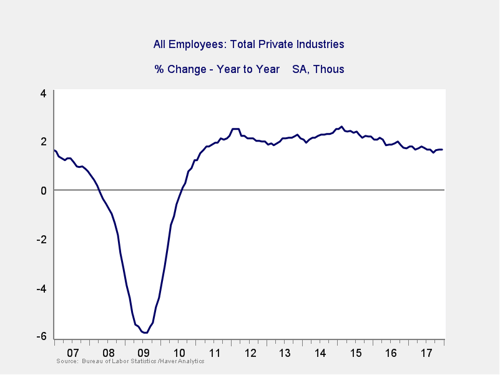 December job growth came in at 148,000, which was well down from the hurricane-adjusted level of the month before and well below expectations. While one weak month is not a reason for concern, and job growth continues to be well out of the trouble zone, this month’s weak data does keep the downward trend in growth intact. 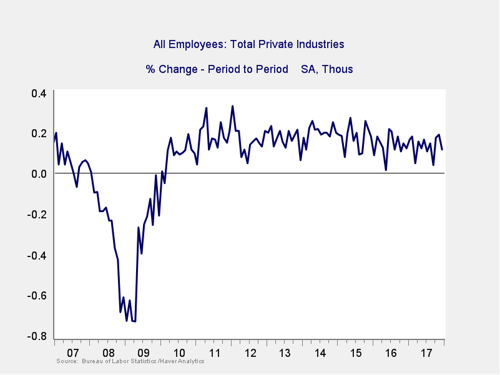 As noted above, December was a surprisingly weak month for job gains, beyond the expected end of the post-hurricane catch-up hiring. While below expectations, job growth was still high enough to keep up with population growth, but the shortfall suggests the slowdown in hiring continues. As with the other signals, this indicator remains a green light, but the risk level is rising. 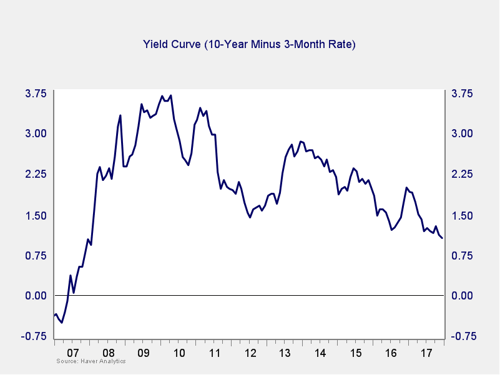 The spread between the 10-year and 3-month rates ticked down a bit last month, to the lowest level since the financial crisis. Since the spread remains well above the trouble zone, we are leaving this indicator at a green light but will continue to monitor it. Future rate hikes by the Fed might narrow the spread further, which will be a key area of concern as we move into 2018. 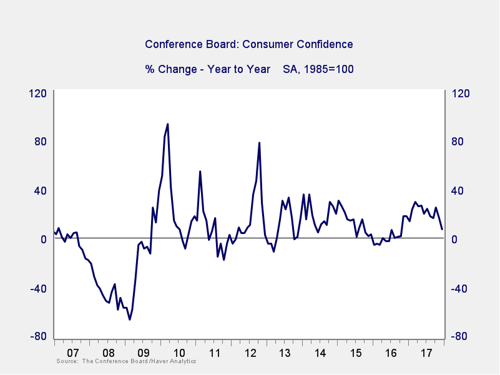 Consumer confidence showed a surprising decrease in December, both in absolute terms and against expectations. All of the decline came from the future expectations component, which suggests that, in general, people are getting more concerned about the future. This pullback took the year-on-year change down to the lowest levels in over a year. As with the other indicators, the decline still leaves this indicator well outside the trouble zone, so we are leaving it at a green light. But the negative trend has accelerated—and bears watching.

Three of the four indicators weakening materially, combined with the slow decline in the yield curve spread, suggests that economic growth may be past its peak. While one month is not enough data to get worried, the fact that all indicators deteriorated together is. Current conditions remain strong, and we are keeping it at a green light, but the signs are that the trend may have changed. Overall, conditions remain favorable, and economic risks are well contained—but risks are rising.

The economy gets a green light for January.