The good news is that confidence continued to be strong last month. Business sentiment remains close to a 21-year high, and consumer confidence remains very close to an 18-year high. Although job growth declined, it was after a very strong month, and it remained at healthy levels. Longer-term interest rates, which had been a concern after a spike, also moderated. Overall, the economic news remains solid, which should support continued growth.

Although there are some signs of slowing trends, notably in housing, the continued strength of these key indicators suggests that the recovery continues and that positive trends remain in place. But the question of whether the tariffs are finally starting to have an effect remains open. The current data indicates that, if so, the effect is minor. 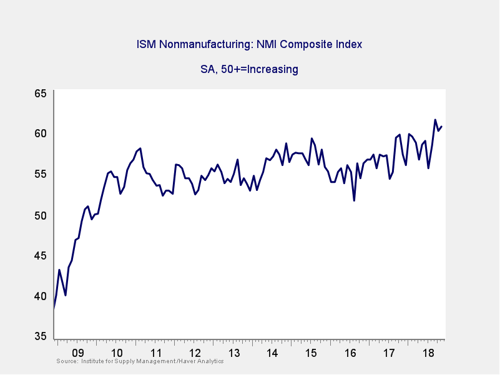 After a leap in September, which took us to a 21-year high, confidence has moderated slightly. It still remains at very high levels—the second highest in more than the past couple of decades. This is a diffusion index, where values above 50 indicate expansion. So, the sustained very high level suggests that growth is likely to continue for the next several quarters. This rise also keeps the indicator on a rising long-term trend line (as you can see in the chart above), suggesting that business confidence may even improve further. This indicator stays at a green light, as it remains very expansionary.

November job growth came in at 155,000, which was below expectations. Still, this is a healthy level, and there is a significant probability that the California fires and Hurricane Michael may have suppressed job growth. On a three-month average basis, job growth also continues to be strong. The continuation of growth in the year-on-year trend, as shown in the chart above, suggests that job growth remains strong and is likely to stay at a healthy level for the foreseeable future. As such, this indicator remains a green light. 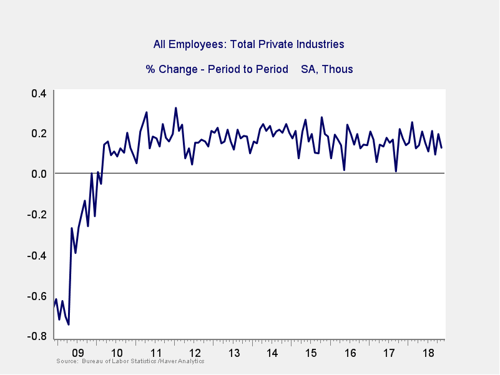 As noted above, November came in below expectations. But October was a very strong month, and there are reasons to believe the November data was negatively affected by natural disasters. As with the other signals, and given the continued healthy long-term trends, this indicator remains a green light. 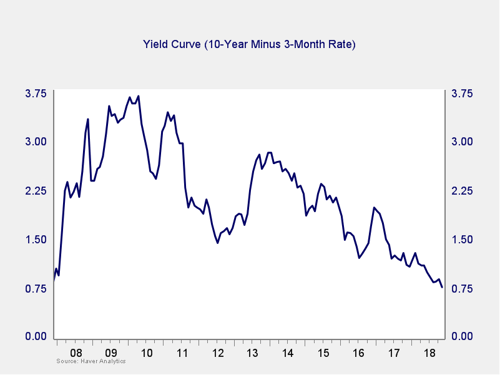 The spread between the 10-year and 3-month rates ticked down last month as 10-year rates dropped back after a surprise spike. This decline in the spread takes us closer to the trouble zone but is still well away from it. So, we are leaving this indicator at a green light. 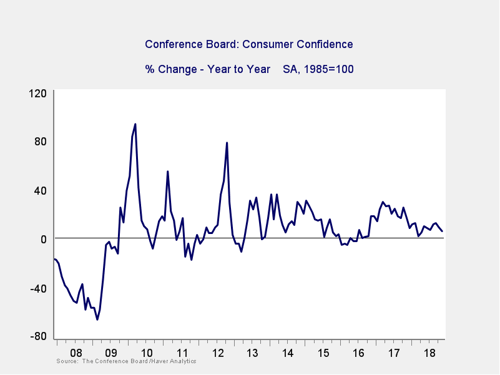 Consumer confidence pulled back slightly in November, from 137.9 to 135.7, but this remains very close to the highest level since September 2000. On an annual basis, this increase was enough to keep the annual rate of change positive, continuing a trend seen this year. With confidence very high on an absolute basis and with the annual change both positive and well outside the trouble zone, there are no signs of risk here. We will leave this indicator at a green light.

The economy gets a green light for December.