As expected, November’s data showed some negative effects as the post-hurricane bounce of October moved out of the economic data. Still, the news continues to be positive. November’s results remain supportive of strong growth, with job growth coming in above expectations and confidence staying at high levels for both business and consumers. Fed policy, despite the expected rate hikes ahead, remains stimulative, although less so than in previous months.

Overall, this month’s data indicates continued expansion. The persistence of the positive data trends through the hurricanes and political turmoil is another good sign. But, as always, we still need to keep an eye on the risks. 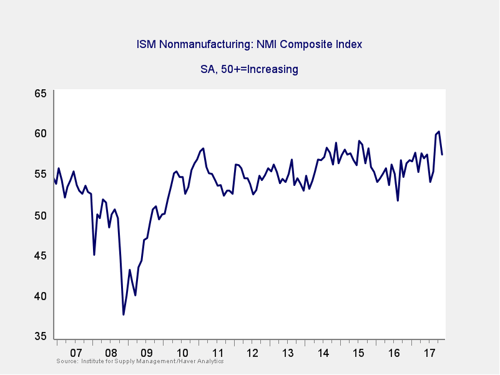 As expected, the Institute for Supply Management (ISM) Nonmanufacturing index pulled back a bit from the post-recession high of last month. Despite this decline, it is still at a high level, consistent with strong economic growth. The pullback appears to be technical in nature, having to do with hurricane effects on how the index is calculated, rather than a substantive decline in economic activity. In addition, the ISM Manufacturing index saw a pullback but remains at a high level. Going forward, these levels of confidence should still support continued growth, leaving this indicator a green light. 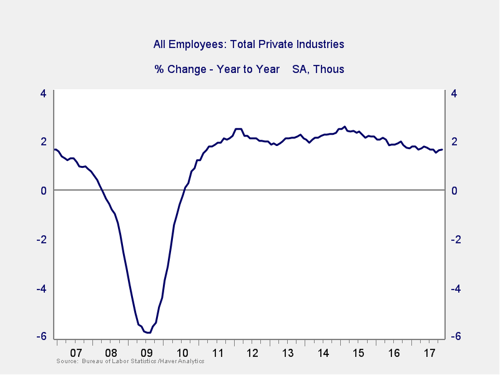 November job growth came in at 228,000—a strong level and well above expectations—although downward revisions to previous months offset some of the excess. Job growth continues to be well out of the trouble zone. But even with this month’s continued rebound, the downward trend continues, suggesting we are moving toward the end of the cycle.

As noted above, November was another strong month after October more than reversed the hurricane effects. This second month of strong gains further demonstrated that the weak September result was simply due to the hurricanes. Given the rebound, this indicator remains a green light.

The spread between the 10-year and 3-month rates ticked down a bit last month, to the lowest level since the financial crisis. But the decline is small. As such, and since the spread remains well above the trouble zone, we are leaving this indicator at a green light but will continue to monitor it. Future rate hikes by the Fed might narrow the spread further, which will be a key area of concern into next year. 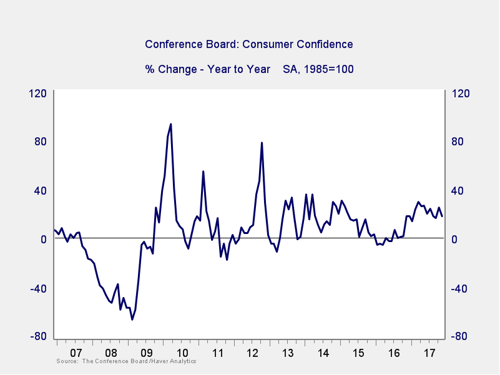 Consumer confidence increased by much more than expected again in November. This surprising development indicates that the strong employment market and stock market have kept people optimistic. At the highest level since 2000 and with year-on-year change at strong levels, this indicator remains a green light.

The continued strength in consumer and business confidence is a significant positive factor and largely offsets the slowing trend seen in job creation. The one indicator that deteriorated—the yield curve spread—did so by only a small amount and remains well out of the trouble zone. Overall, conditions remain favorable, and economic risks are well contained.

The economy gets a green light for December.