For the first time in quite a while, we saw disappointing news in the monthly reports for two major data points. First, job growth weakened significantly. Although the prior months were revised upward—more than making up for the shortfall—the question remains as to whether the labor market is getting closer to tapped out. Second, business confidence pulled back significantly. It remains expansionary, but this drop is an unusual move and raises the question of whether the tariffs are finally starting to have an effect.

Still, consumer confidence remains strong, and fiscal and monetary policy remains stimulative. Overall, the economic data continues to be strong and growth persists, but there are increasing signs that risks are rising. 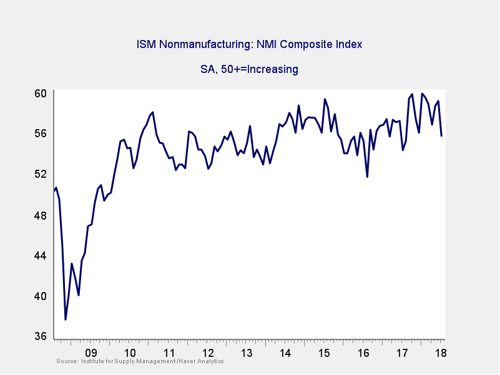 Business confidence dropped significantly last month, taking it to the lowest level of the year. The drop—to 55.9 for July—was well below the June level of 59.1 and well below expectations. This is a diffusion index, where values above 50 indicate expansion. So, even the lower level suggests that growth is likely to continue in 2018. But the break through the long-term trend line (as you can see in the chart above) suggests that business confidence could be rolling over. This indicator stays at a green light, as it remains expansionary, but it will warrant close attention in the event of further declines. 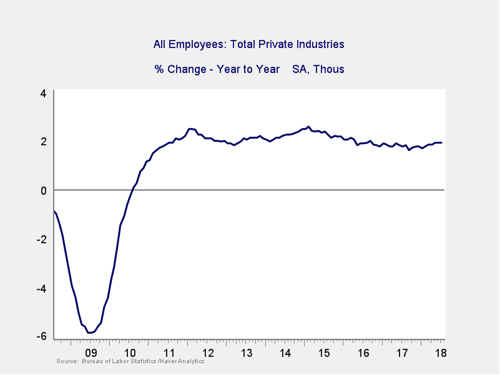 July job growth came in at 157,000, well below the expected 193,000. But June was revised up from 213,000 to 248,000, more than making up for the shortfall. These numbers suggest that job growth continues, but the significant slowdown may be a warning sign of slowing. This is further supported by the flattening of the year-on-year trend, as shown in the chart.

Overall job growth continues to be strong, and the weak data point is most likely an outlier. Nonetheless, the fact that the longer-term trend has flattened suggests that job growth may be at risk. As such, this indicator remains a green light but could be weakening. 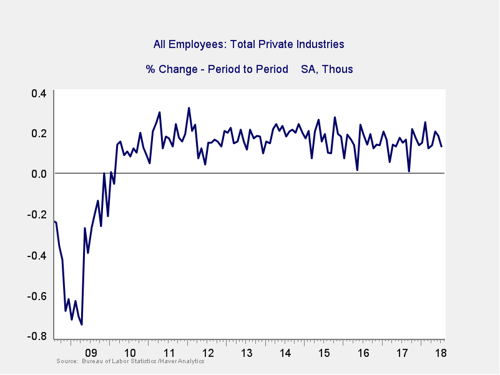 As noted above, July's weak results were offset by upward revisions to job creation in June, and job growth remains solid. One weak month happens occasionally (as shown in the chart), and likely that is the case here. As with the other signals, and given the continued healthy long-term trends, this indicator remains a green light. 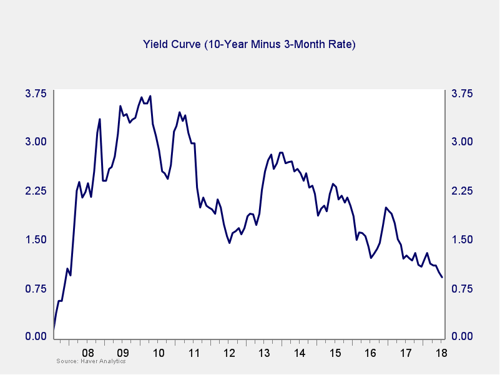 The spread between the 10-year and 3-month rates dropped slightly last month. While the range continues to narrow, we are still above the trouble zone and outside the immediate risk levels. As such, we are leaving this indicator at a green light. Future rate hikes by the Fed might narrow the spread even more, which will be a key area of concern as we move further into 2018 and will need to be watched. 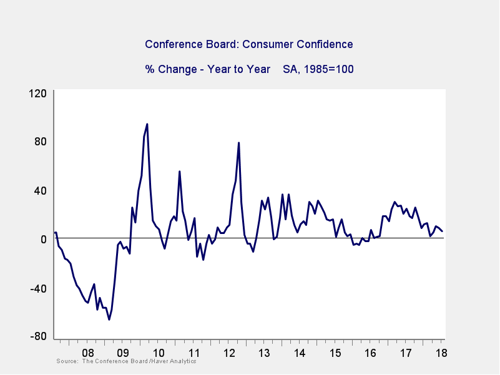 Consumer confidence rose in July, from 126.4 to 127.4. This rise brought it close to February’s peak, which was the highest level since 2000. On an annual basis, however, the change continues to decline, suggesting the trend is now downward. Still, confidence remains quite high on an absolute basis, and the annual change remains well outside the trouble zone. Nonetheless, the negative trend suggests confidence may well be in the process of peaking, and we will need to keep an eye on it. Despite that, with no signs of immediate risk in the annual change figure, we will leave this indicator at a green light.

Conclusion: Economy growing, positive trends may be rolling over

All four indicators remained positive on an absolute basis, and the data remains strong. While some areas are weakening and the longer-term trends may be rolling over, present conditions remain favorable overall. The economy gets a green light for August.