Economic Conditions Remain Positive, but Clouds on the Horizon

We closed yesterday’s post with the observation that although current conditions remain good on the economic front, there may be clouds on the horizon. As such, it could be time to start thinking about a pending recession. Today, I want to take a deeper dive into that. But let’s start with why things are still good.

Although confidence is down over the past couple of months, it is still above levels from 2017 and before. This level is also consistent with continued strong economic performance. Consumers are certainly doing their part by spending more, which should help keep growth strong for the next couple of quarters.

When you look at the economy today, then, the fundamentals are not only sound but strong. We will take a closer look at this next week in the Economic Risk Factor Update. Right now, it appears we will have nothing but green lights again.

So, why the worry? As solid as the current data is, looking forward things get a bit murkier. 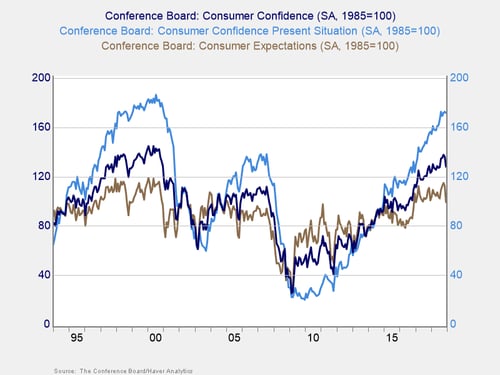 As you can see in the chart above, the present-conditions survey is at levels we last saw in the dot-com boom. It has been climbing consistently since 2011, before steadying over the past couple of months. Expectations, on the other hand, which have been steady since about 2015, have now dropped to the lower end of that range. People may feel good in the present, but they haven’t expected the future to be much better for the past couple of years. The recent drop also suggests that future expectations may be even more vulnerable going forward.

Business confidence. We can see the same signal in business confidence. Manufacturing confidence just registered the biggest monthly drop since 2008 and, before that, since 2001. Although it remains in positive territory, that big shift in sentiment can certainly be a cautionary sign. 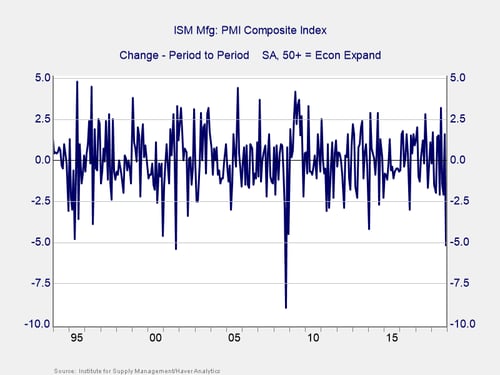 Business investment. That cautionary signal also shows up in business investment. Investment did pick up in 2016 and 2017, especially driven by the tax reform. But it has since rolled over—even as hiring continues to increase. Businesses are confident enough to hire but not to invest more, which suggests a level of caution as workers can be laid off. 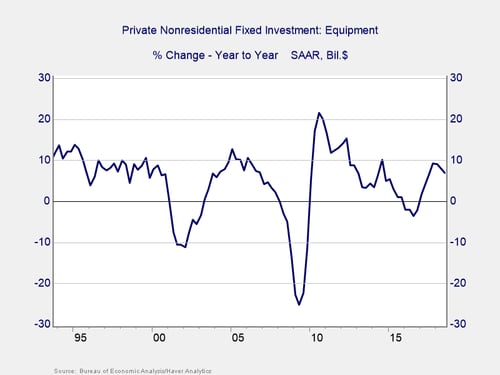 International trade is also a growing concern, as the trade deficit has continued to grow and import growth has outpaced exports.

All in all, although conditions remain very positive, the clouds are indeed there and growing. At the same time, much of the reversal in sentiment may be largely due to recent developments—the U.S. government shutdown, the trade war, and so on—that will probably be transient. Present worries do not necessarily signal the end of the recovery, but they do remind us that at some point it will happen.

The recovery looks likely to continue for a while and may even pick up again if some of the bad news resolves. Regardless, now is the time to start thinking about the next steps. It may be a while, but the recent data has let us know changes will certainly be coming sooner or later.