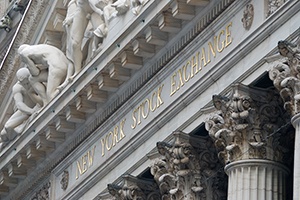 Will the stock market rally continue? That’s a big question right now, and the answer will depend on two things:

The signs on the latter look good. So today, we’ll take a last look at earnings for the fourth quarter of 2016, to see what the results can tell us about the future.

How did we do?

About six weeks ago, I wrote about how I expected the earnings season to evolve. At the time, only 6 percent of companies had reported, and earnings were expected to rise by about 3.2 percent. Based on past earnings misses, I argued that we could come in as high as almost double the projected level.

As of right now, with 98 percent of companies reporting, actual earnings growth is around 4.9 percent, about one-and-a-half times as high as expected. We did indeed get that upside surprise, and I would argue that it has been one of the main drivers of the market’s strong performance so far this year.

What does this mean for the future?

To find out, let’s take a look at how earnings estimates usually evolve over time, using this 2016 chart from Yardeni Research.

In 2016, earnings estimates for each quarter tended to decline in the period up to quarter-end, then rise again to match the actuals. Taking this at face value, we can expect estimates for 2017 to be low for the first quarter, probably around accurate for the second quarter, and too high for the second half of the year. In other words, 2017 estimates are probably still a bit too high.

At the same time, note that the upward adjustments got larger—that is, analysts were becoming increasingly pessimistic—in the first three quarters of the year but then calibrated to the new reality in the fourth quarter, with a much smaller upward adjustment. This suggests that analysts are now more in sync with actual performance, and that the 2017 estimates might end up being more on the mark. 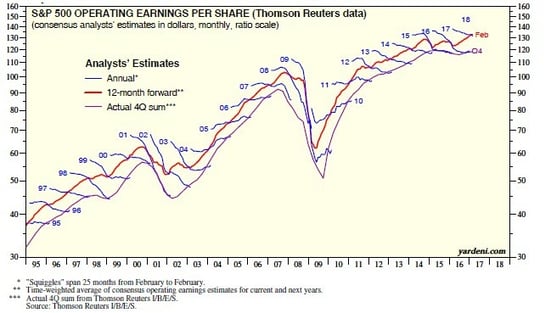 A positive outlook for the rest of the year

Overall, the data indicates that the current relatively positive estimates for 2017 earnings growth are likely to be fairly close to reality. More, as we get closer to each quarter-end, those estimates may be more likely to be revised up than down. In other words, the fundamentals will likely continue to improve, and possibly even accelerate, which should serve as a significant support for the stock market.

None of this is guaranteed, of course, but just as we (correctly) looked at the numbers at the start of this quarter and predicted that earnings would likely fare better, we can do the same for 2017. With half of the stock market equation in good shape—and consumer and business confidence improving, which will support the other half—the rest of the year looks likely to remain positive.

By no means am I suggesting that we won’t see any pullbacks; we almost certainly will, and potentially significant ones. But the foundations of the market remain solid, and although market risks remain high on a macro level, the immediate risk level doesn’t appear to have increased significantly. We will, however, look into that with our regular monthly risk update next week.