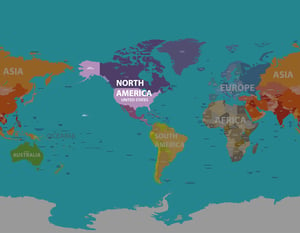 Yesterday, the global financial markets experienced another notable drop, reflecting investor concerns regarding the ongoing spread of the coronavirus. The major U.S. indices went down an additional 3 percent or more. These losses, on top of the drops we saw on Monday, have taken down the market significantly—with the S&P 500 more than 7 percent off its high of four days ago.

By historical measures, the current market drop is unusual. Declines of a similar magnitude and duration have happened only eight times before, according to Bespoke Investment Group. Some of those drops came in troubled times for the markets, but others occurred when—as now—the market had recently shown strong gains. Is there a pattern as to when severe pullbacks like this happen? From the data, it seems not. Instead, the losses seem to be news dependent. In the past, as now, the headlines suddenly send the markets into panic mode.

If we take a deeper look at those prior downdrafts, though, we find some interesting facts. Following seven of the eight major pullbacks cited above, the markets moved higher, by around 4 percent on average, over the course of the next three months. And eight of eight times, the markets were higher six months later by an average of about 12 percent. Sudden pullbacks have not, historically, meant that markets would remain down, but rather the reverse. This scenario makes sense, in that markets tend to react quickly and forcefully, as we have just seen. As the actual events play out, however, markets adjust to outcomes that are less severe than feared—and then move back up.

We can gain reinforcement for this insight by looking back at a recent occurrence. At the end of 2018, U.S. markets had dropped almost 20 percent, on fears of higher interest rates and a recession, only to rebound quickly at the start of 2019. We can see the pattern here. The market pulled back hard on bad news, and then it bounced up when the facts didn’t accurately reflect the fears.

Is the reaction reasonable?

Arguably, the market reaction so far is a reasonable one rather than an overreaction. Given the size of the downturn’s potential effect on earnings and the overall economy, a hit of around 10 percent seems in the ballpark. If this estimate is accurate, it would be consistent with previous market reactions. If the news improves, we should see the economy recover. Even if the news worsens—and another round of new cases is likely in the secondary infection centers outside of China—the overall impact looks likely to be in the range of the current market correction. We may well see further volatility, but most of the overreaction could be behind us.

That said, however, we need to consider what will happen if the global situation does indeed get worse. It is possible that the spread of the coronavirus will be upgraded to a full pandemic. Cases are rising in Italy, Iran, and South Korea, and they may significantly expand in other countries.

As an economist and investor, I am keeping an eye on two primary metrics. First, for the economy, I will be watching consumer confidence. With the stream of scary headlines, a decline in consumer confidence is quite possible. And if this occurs, it could well hurt consumer spending—the major driver of the U.S. economy. The most recent confidence number, which just came out, missed expectations but remains high on an absolute basis. But if consumer confidence were to roll over, the chances of a recession would increase.

Second, for financial markets, I will be watching the 200-day moving average of the S&P 500. As I have said many times before, this measure is a reasonable rough-and-ready guide to whether the market is headed up or down. Right now, the 200-day moving average remains well above the level of 3,046. I won’t become seriously concerned about the markets unless and until we break through that level, which still provides some cushion. Even at that point, however, it still won’t be time to panic—just to take a closer look.

Despite the second day of a big drop, panic is not the right reaction, and investors may be getting that. Markets looked like they might be staging a rally this morning, and they are still hanging on to nominal gains as I write this. This fact doesn’t mean we are out of the woods, as we could easily see further declines. It does, however, suggest that investors are starting to reassess the real risks out there, rather than simply reacting to the headlines.

We should do the same. Two bad days don’t make a bear market, and so far the data suggests the risks are much less than the headlines imply.