I wrote yesterday about gaps opening up in the stock market, and how the tech space in particular is starting to look a lot like a bubble.

Among other things, I mentioned that the stock market isn’t in a bubble yet because companies are making money. Later in the day, though, I saw a story pointing out that 71 percent of companies that went public last year were unprofitable, the highest level since 2000 (when 80 percent weren't making money).

Another article that caught my attention focused on the “gig economy,” which underlies both Uber and Airbnb, two of the current tech stars. These companies are vulnerable to legal action by workers who are being required to act as employees, without the corresponding benefits and protections. Internet companies have largely gotten a pass on regulation so far, but it won’t last forever. It didn’t work for sales taxes, and contract workers could be next.

It's also worth noting that competition is white-hot. Although the young entrepreneurs I mentioned in yesterday’s post have a good shot, I got pinged this morning by someone who's much further along in developing a similar app. Even if you have a great idea, there are a lot of other people and companies out there. While one may succeed, all of them cannot.

The intersection of hope and risk

Entrepreneurs and investors hope, and try to minimize the risk. Trust me, I get it. I’ve been down that road myself more than once. This is the engine of capitalism. The problems start when hope gets excessive and risk gets discounted too much.

Hyman Minsky’s work on different types of finance and the points at which they become unstable is relevant here. The phase we need to watch out for is “Ponzi finance,” when the success of an investment depends on a continued increase in prices.

Bubbles take hold when the market as a whole starts to expect continued price increases, and acts accordingly. Bubbles last until the “Minsky moment,” a phrase coined by Paul McCulley, the point at which everyone realizes prices can’t go up forever. You may remember how that happened with the U.S. housing market not too long ago.

How close are markets to a bubble?

The question is if, and when, financial markets will return to that point. You could reasonably argue that the bond markets are already there, although with many European bonds now at negative interest rates, there seems to be no downward bound.

For stock markets, in terms of valuations, margin finance, and market capitalization as a proportion of the economy, we're already at levels that, in the past, have led to Minsky moments. You can see this in the following charts. 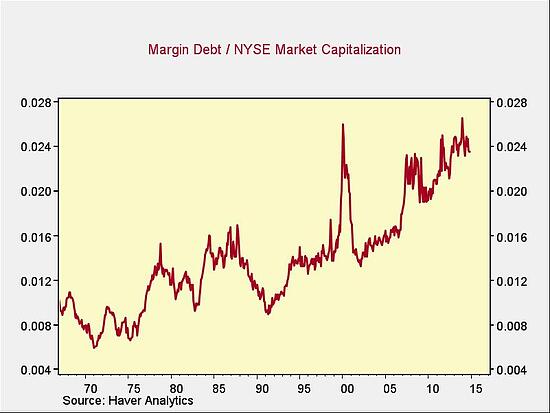 Market capitalization as a proportion of the economy: This is often known as the Warren Buffett indicator, as he is said to favor it. Note the previous peaks in 1973, 1987, 1999, and 2006.

All of these indicators show that, at the moment, investors are willing to pay high prices for stocks. They will pay higher prices for earnings, borrow more, and consider stocks to be worth more of the economy as a whole than at most times in the past. All of these are signs that hope is at very high levels historically.

But how much further can prices rise?

For those hopes to pan out, prices have to rise even higher. Current earnings, even if they exist, are not sufficient to allow investors to hit their expected target returns. This is, if you remember, the definition of Ponzi finance. The possibility of a Minsky moment is very real.

The real economy can continue to do well even as the stock market declines, and it will eventually lift the market back up. As investors, though, history suggests we need to take a very close look at our hopes in relation to the risks.