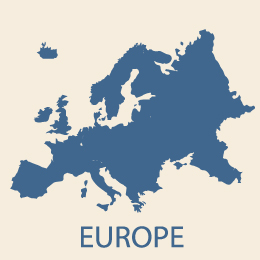 As I’ve noted over the past couple of days, Europe is back in the headlines. The confrontation between Greece and Germany has once again captured the world’s attention with the real prospect that the eurozone could break down.

This internal battle, combined with the ongoing face-off between Germany and Russia in the Ukraine, shows that the Europe of today is not the same as the Europe of the past 30 years. And for the rest of the world, it’s also much riskier.

When things change, and they have, it’s rarely a matter of a completely new situation—“different this time,” in the argot of the financial markets. More often, it's a return to previous relationships and previous modes of behavior. As the French say, "Plus ça change, plus c’est la même chose."

For Europe, the rising confrontation between nations, the dominance of Germany (very real, and very resented), and Germany’s need to protect itself by controlling the behavior of its neighbors, while they in turn fear its power but want its wealth—all hark back to earlier periods.

To understand the present, look to the past

As Americans, we’re not actually very good at this. What we need is an interpreter with a foot in both worlds, who can take the historical European experience and recast it in modern terms, enabling an American ear to hear the echoes between past and present.

George Friedman, author of the new book Flashpoints: The Emerging Crisis in Europe, is just such a guide. Friedman hails from a European family that fled the continent in the aftermath of World War II, when he was a baby. Friedman has studied politics and international relations all his life, and as the founder and CEO of Stratfor, a private intelligence firm, he has made the practical application of that analysis his career.

In this book, he considers the present state of Europe in the shadow of its past. Weaving in his own personal history and experiences, he brings a personal lens to the narrative that, for me, made it more meaningful and effective.

The book consists of three main parts, which I summarize as follows:

The core of the third section revolves around an explicit question: Why should the current European world be any more durable than the one of 1914? By drawing comparisons between national behavior and needs at that time and the present, Friedman makes a strong case that it's not, while at the same time pointing out how the world has indeed changed since then.

Friedman provides a context for understanding the current situation that offers both reason for hope and serious cause for concern—which, to my mind, is exactly the appropriate stance.

I recommend reading Flashpoints as a way to deepen your understanding of where Europe as a whole has come from and where it's going, as well as how it fits into the rest of the world. It is a well-written, moving statement from a deeply informed humanistic thinker who keeps hope in his heart but still lets his eyes see clearly.