This will be a short post as I am traveling. I spent last weekend in London, where I saw (to my delight!) not one but several black swans. 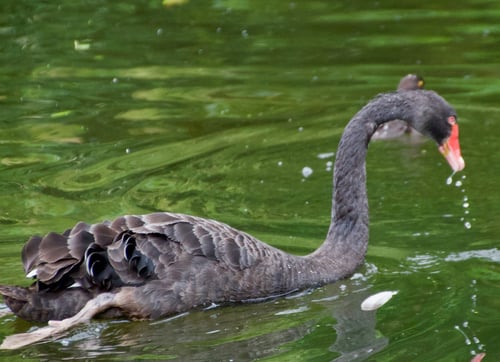 I was delighted because I had never actually seen one. In fact, once upon a time, no one (at least in Europe) had seen a black swan because all of the swans were white. Since they were all white, a black swan became something that no one saw or expected. Over time, it became proverbial as something that never happened. This was not because it was impossible but because people simply didn't think it could happen.

The term black swan actually comes from natural philosophy, the predecessor of most sciences. When Europeans had only white swans on their continent, they assumed that white swans were the only possibility. In Australia, as it turned out, there were indeed black swans. When European scientists got there, they found that their core assumption was just that: only an assumption—and one that turned out to be wrong.

Watch for the unexpected

In our world of economics and investing, black swans (i.e., things that were possible but that no one really thought could happen) are legion. The 1987 crash and the flash crash. The dot-com boom and subsequent collapse. The 2009 housing market collapse. And these are examples only from the past couple of decades.

Black swans are what can cause the most damage to your portfolio because they are both damaging and completely unexpected. As such, they are something we all need to keep an eye out for. Now that I have seen one, I am going to keep this picture of the black swan on my computer. It will remind me on a daily basis to keep looking for things that no one really thinks can happen.

So, what could a black swan look like today? A sudden and wide-ranging increase in interest rates is one immediate possibility, which no one thinks is a serious possibility. A substantial pullback in world stock markets is another. Again, no one is really expecting it, but it would be a natural consequence of an increase in rates. A major trade war is another one, but that is rapidly becoming more gray than black.

Look outside your boundaries

Travel is broadening. With last weekend in London and this week in Portugal at a Commonwealth conference, I am getting a chance to move outside my usual geographical boundaries. The black swan is a good reminder that I should make an equal effort to look outside my conceptual boundaries as well.

Hope you enjoy the black swan as much as I did!