Are Market Declines Setting the Stage for Future Growth? 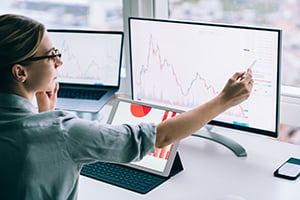 When we look at yesterday’s market performance, something stands out. It’s not just the magnitude of the decline, bad though it was, but the speed. And it wasn’t just yesterday, as this past month has seen pretty much all of the decline for the past quarter and well over half of the decline for the year. In other words, the market has essentially been down all year. It started to stabilize in March and April—only to collapse again in May. That’s scary.

Close to the End?

But something else, something more encouraging, caught my eye as well. Both stocks and fixed income are down significantly for the year and down even more from the highs. But the May collapse in the stock market was not matched by a decline in the bond market, which has been pretty stable this month. Bond markets are driven almost entirely by interest rates, which have steadied in recent weeks, so that stability makes sense. Further, it implies that interest rates are no longer the primary driver of the stock market decline, so something else is going on. That means we may be close to the end of the pullback.

Think about it. For most of the year, as I have noted before, rising interest rates pulled stock market valuation levels down, along with bond values. Then, when interest rate expectations started to stabilize, so did bond values and the stock market. But now, even though the U.S. Treasury 10-year yields remain below 3 percent and bond prices remain stable, stock markets have plunged again. Clearly, something else has happened.

A Collapse of Confidence?

Looking at the internals of the market, that something seems to be a sudden fear of a consumer-led recession. Both consumer sectors of the market, staples and discretionary, were among the hardest hit yesterday. Target had a historic loss in its stock value, and Walmart also got hit very hard. Based on their earnings, along with other trends such as declining consumer confidence and real incomes, the consumer suddenly looked much more vulnerable. As goes the consumer, so goes the economy and ultimately the market. Investors were already worried about growth, and suddenly those worries had an immediate focus—and confidence pulled back, along with the market.

This collapse in confidence, then, is what's driving the most recent decline. This is actually good news. Why? First, the prior pause suggests that valuations are getting close to the levels justified by interest rates, which should provide something of an anchor. Second, market drops due to a sudden loss of confidence often reverse when the fundamentals remain sound and confidence comes back.

What About the Fundamentals?

The fact is that the fundamentals do remain sound. Job growth remains strong, consumer spending is very strong, and business confidence and investment remain healthy. Yes, there are real things to worry about, and there are signs of slowing. But the momentum the economy has should keep it growing for at least another couple of quarters. Confidence has grounds to return.

Beyond the economy, corporate earnings are also expected to keep growing. Earnings growth so far continues to exceed expectations, and analysts are looking for more growth through next year. With valuations now close to pre-pandemic levels, that provides both a cushion in the short term and a reason for market appreciation in the medium term.

Given all that, it makes sense to worry. But the depth, the speed, and the duration all combine to suggest that as long as the fundamentals are sound (as they are), we are likely getting close to the bottom. With valuations now at pre-pandemic levels, we should be closer to the end than to the beginning.

Could we see more volatility or a larger drawdown? Certainly. But, given the underlying conditions, we can already see the prospect of better performance ahead. Watching a market decline is always nerve-wracking, but ultimately this is part of the price we pay for strong returns over time. Declines set the stage for future growth, which often happens faster than anyone expects.