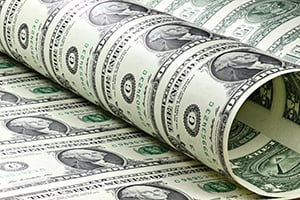 We are now entering earnings season. After a great deal of worry and hyperventilating, we are starting to see some real data on how companies are doing this year. So far, the news looks good (at least according to FactSet).

As of the end of last week, with 6 percent of S&P 500 companies reporting, about five of six companies (83 percent) beat earnings expectations. This number is above the usual rate of around three-quarters. Those beats are averaging around 7.5 percent, which is also well above the five-year average of just under 5 percent. In other words, more companies are beating expectations, and they are beating them by more. This performance is an early indication that the initial expectations were, as usual, too downbeat.

We can see this pattern in the overall expectations as well. As of last week, analysts expected earnings to be down by 4.5 percent for the quarter as a whole. But with the past week’s surprises, that decline is now down to 4.3 percent—which will get even better if the positive data continues.

Of course, earnings are not the whole story. Revenues are also a good indicator of the health of corporate performance. About three of five companies (59 percent) reporting so far have beaten the estimates. This result is in line with the five-year average. But the size of the beat, at 0.7 percent, is slightly below the five-year average of 0.8 percent. This result is certainly not bad but suggests that the overall performance may not be quite as strong as earnings suggest.

These are early days, but we can draw some preliminary conclusions. First, despite the current (very valid) concerns, the performance of past earnings seasons looks to be a reasonable guide to the present one: companies continue to do better than expected. This outcome shouldn’t be a surprise—it usually happens—but somehow every quarter it surprises us again. So, we can reasonably expect the outperformance to continue.

Second, as earnings season progresses, we should see overall market expectations improve as well. If the rest of the reports are as strong as those so far, we would get another quarter of earnings gains. This strength is not at all what the market is expecting today and could be a further tailwind.

Still, not all the news is good. One real concern is around revenue versus earnings. With expected revenue growth of 4.8 percent for the quarter against expected earnings growth of
–4.3 percent, margins are clearly dropping, a negative sign. Even if we do end up getting positive earnings growth, it would likely be below revenue growth, which would signal a decline in margins. This decline is a warning sign for the future. It is also consistent with companies reporting rising labor costs as a significant cost issue—and with rising wage growth in the economic reports. There are real signs of increasing headwinds in the data so far.

Not a bad place to be

Markets don’t tend to trade on absolutes, however, but on performance against expectations. Here, the data so far is very good and, based on history, is likely to stay that way. We should see results for the quarter as a whole continue to beat expectations. So, despite the worries, in future quarters we will again be playing the expectations game—with the same likely outcome.

It’s too early to draw any firm conclusions. But I think we can say that things are looking about as good as, and even somewhat better than, could have been reasonably hoped for. And that’s not a bad place to be.