A Bad Day in the Market: Is It a False Alarm?

Maybe so. But if you turn those drops into percentage terms, of just more than 3 percent, they don’t look nearly as scary. I’ll grant you, declines of 3 percent in one day can rattle markets. Historically, however, they happen every three to six months. So, in a normal year, we should see a day like yesterday two or three times—and that is just what is happening in 2018. We saw an even bigger drop in January and February (remember that?) and another one in March. This year is shaping up as quite average in that sense.

Bigger picture, then, we are not yet at a worry point. The S&P 500 is now down just under 5 percent from the all-time high, which doesn’t even qualify as a correction. We have returned to levels last seen in July. Again, it is not nothing but certainly not a big deal.

This is not to minimize yesterday but, instead, to try to understand what it means. Is this a time to worry? History says days like this are normal. So, as scary as yesterday’s market action has been, the damage thus far is not actually all that bad. Something to keep in mind. Still, there is reason to pay attention.

As I have said multiple times, I start to pay attention when the market cracks its 200-day moving average. We got very close to doing that yesterday, for the first time since April of this year and since June 2016 before that. This break of a long-term trend line is definitely something worth noting. It doesn’t happen that often, and it can be a sign of more trouble ahead. We are not there yet. But the fact that we are that close, and could easily break it from here, means we should pay attention.

Here again, though, this is a reason to pay attention but not to panic. The market broke through the trend line several times on a daily basis earlier this year and in 2016, only to bounce back up. Looking at the past several years, we can see that there have been multiple breaks, some lasting for months. Ultimately, however, the market bounced back and moved higher. 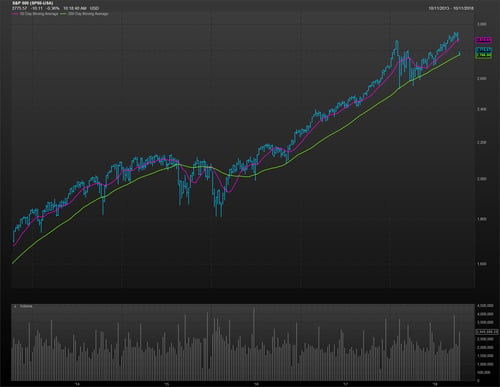 Looking at the chart above, we saw breaks earlier this year, as well as in 2016 (remember that?) and in 2015, which both lasted for months. We also saw quick breaks in 2014 and 2012. And, of course, we saw long breaks in 2011 and 2010. But the past seven breaks below the 200-day trend line have been false alarms rather than signals of something worse. Chances are that this one is a false alarm as well—but maybe not. How will we know?

Could things get worse?

First, let’s define “worse.” I would call a long-lasting bear market, defined as a decline of 20 percent or more (e.g., in 2000 or 2008), a pretty good definition of what I am worried about. What would it take to get there?

In both of those cases, the break through the trend line was associated with a recession. In fact, this is the case for almost all bear markets. Although 1987 and 1962 are the exceptions here, a recession is the major risk factor we need to watch for that would turn a trend line breakthrough into something worse. If a recession were imminent or even a serious risk, that would significantly raise the chances that this break could get worse.

Fortunately, while the economy may be slowing, it is still growing and at a reasonably healthy pace. Hiring and confidence are strong, and spending continues to grow. Because of the supportive fundamentals, chances of a recession remain small. As such, the likelihood is that this decline will be another false alarm.

That is not to say there is no risk at all. While the fundamentals are outside the worry zone for a recession, the real question here is confidence. Up until recently, there was a high degree of confidence that the economy was growing, that companies were making more money, and that the market was solid. That led to steady appreciation and ensured that the dips were small and short lived. The question going forward is whether that confidence will continue. Even in the absence of a recession, a break in confidence could lead to a worse decline in the market.

Fortunately, confidence remains high. In fact, consumer confidence is at an 18-year high, and business confidence is at a multiyear high. These high levels are well supported. As the economy continues to grow, people continue to get hired and spend. As a result, companies are selling more and making more money. None of this was changed by what happened yesterday. Over time, markets typically respond to fundamentals, not temporary changes in confidence.

Could we see a bigger pullback?

Certainly, we could see a bigger pullback, just as we did earlier this year and in early 2016. Is this bad day the start of another big crash? So far, the signs don’t support that conclusion.