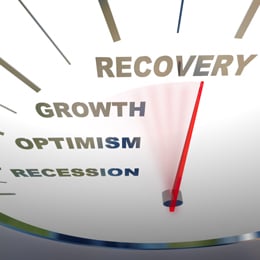 If you haven’t already seen the news online, you’ll no doubt see it on tomorrow’s front pages: first-quarter economic growth was revised down from an anemic 0.1-percent gain to a much worse 1-percent loss.

Why you should ignore the headlines

Looking at the details of the report, we can see where the decline came from—and why it’s not something to worry about right now.

So far, the second quarter continues to look like it will be much stronger, and the recovery remains on track.

But what will this mean for corporate profits and earnings?

In general, first-quarter earnings were a disappointment, with slower growth despite many beats (albeit on very reduced expectations). Will a recovery in the second half improve matters?

Probably somewhat, but not as much as it will for the real economy. Much of the decline in profits was from the rest of the world, while reductions in fees from mortgages and reduced trading revenues hit the financial industries’ profits as well, and these factors won’t recover fully with the weather. Companies are also guiding expectations lower at a higher rate than usual, suggesting their expectations are not strong.

Overall, the real economy should continue to do well, but that may not be enough to match the current expectations for the financial economy.