Today, I want to tie together my posts over the past week. If you remember, we talked about the mismatch between current return expectations and what history suggests as likely, and what investors could do about it. I talked about truly diversified asset allocation and regular rebalancing as a required base strategy, along with possibly using some other risk-reduction technique, like market timing, to guard against large drawdowns. This discussion was interrupted, in a very timely way, by a response to turbulence in emerging markets and a relatively large (in recent terms) market decline in the U.S. on Friday.

This makes a great backdrop for discussing some of the potential advantages—and disadvantages—of our risk-reduction strategies. Looking at asset allocation and rebalancing first, let’s assume you started 2013 with a $100,000 portfolio, with an allocation of 60-percent stocks/40-percent bonds. At the end of the year, that would have turned into $79,434 for stocks and $39,188 for bonds, using the S&P 500 and the Barclays Aggregate Bond indices, respectively, for a total of $118,622. Rebalancing would have brought this to $71,173 in stocks and $47,449 in bonds. By reallocating more than 10 percent of your stock position to bonds, you would have been less exposed to the decline in stocks this month and more exposed to the gains in bonds. You would have been in a relatively superior position to someone who had just let the gains run without rebalancing, but you still would have had a relatively large exposure to losses in the equity part of your portfolio.

If you elected to add another layer of risk protection, such as getting out if the market dropped below a moving average, your results would depend on the level of risk you wanted to eliminate—that is, the term for the moving average you selected. Using a 50-day moving average, for example, you might have been out at about 1,810 and been spared any decline since then. If you were using a 100- or 200-day moving average, on the other hand, you would still be in the market and exposed to any further losses down to that point.

On the flip side, using the 50-day results in many more moves in and out, with consequent costs and tax implications—and potentially missing upside moves until the moving average catches up with the index. This is why tactical strategies tend to underperform in bull markets, as they miss upside by stepping out during what turn out to be temporary dips.

Looking at the chart below, for example, you can see that stepping out at either the 50- or 100-day moving average line over the past year would have caused several sets of transaction costs, tax implications, and potential losses of upside, even as the market continued to rise. Using these lengths as the basis of a tactical strategy was a loser over the past year. (Thanks to Pete Essele for the chart.) 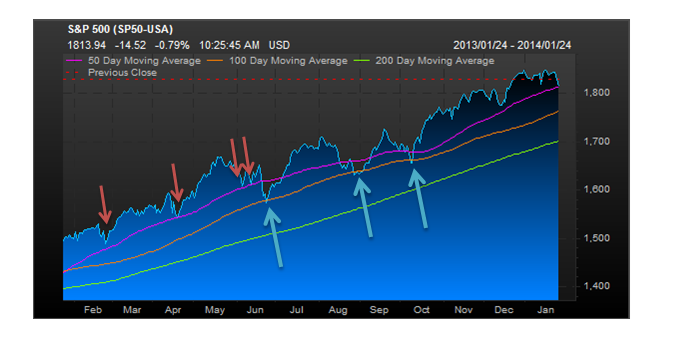 Selecting a risk-reduction metric, whether a moving average or another tool, is therefore a balance between the risk you’re willing to take and the number of transactions or amount of activity you’re willing to accept. The longer-term the metric, the more effective downside risk you’ll face, but the fewer transactions and costs. A third consideration is how often you should review the portfolio. More frequent reviews aren’t necessarily better. Often, as the chart above shows, any breaks are just noise that would be ignored if looked at monthly, but would be traded on a daily or weekly review. If you decide to use this type of strategy, selecting these three components involves reviewing the historical experience and aligning it with your preferences and future expectations.

Putting all of this into context, what it would mean today is that, ideally, you’ve already reviewed the data; decided on the approach you want to take, whether buy-and-hold or tactical; and laid out your decision rules. If you decided on a tactical rule, based on the 50-day moving average, for example, you might already be out—and just as important, you’d know when to get back in. For a longer-term indicator, you would still be in, but you’d know when you should get out. By properly testing these rules, you can remove a lot of the uncertainty from the portfolio management process and have a reasonable idea, based on history, of the risk levels you’re assuming—and what the costs will be.

You have to remember, though, that any set of rules is fallible. The flash crash, for example, had it stuck, would have hit any tactical portfolio just as hard as a buy-and-hold one, because it happened too fast. Markets could behave differently in the future, repeatedly nudging above your metric only to retreat and drop some more. To use the driving metaphor again, you may be in a Volvo, but if a rock drops off the cliff above you, you’re still going to get hit hard.

And, of course, as we see from the chart above, the market can turn around and take off again—potentially for years at a time. This is why market timing fell out of favor in the first place, because of persistent underperformance to buy-and-hold strategies during a multi-decade U.S. bull market.

The idea behind any of these strategies is to recast the balance between risk and return, focusing more on risk—especially in higher-risk times, such as when valuations are high, like now—at the expense of some limited amount of return. I’m not actually recommending such strategies, because their applicability depends on the individual investor’s understanding and personal risk and return preferences, but I do think they’re worth a look.

The preceding contains hypothetical examples and are for illustrative purposes only. No specific investments were used in these examples. Actual results will vary. Past performance does not guarantee future results. Asset allocation programs do not assure a profit or protect against loss in declining markets. No program can guarantee that any objective or goal will be achieved.