Since there’s really no movement in the DC stalemate, I thought I’d highlight some good news today. I continue to keep an eye on the government, and the risk grows daily. At the same time, though, it’s important to remember that there is life beyond the Beltway (for those who don’t know, that’s the highway surrounding Washington, DC) and that the real economy is actually doing pretty well. Even as DC stares and Wall Street trembles, Main Street has some news to be glad about.

Although this number is up a bit from last week, it’s still at close to its lowest levels since just before the financial crisis. The four-week moving average, a better and less volatile data point, decreased to 305,000. As you can see from the chart below, we’re at very healthy levels, more consistent with a boom than a bust. The last time we were at current levels was around 2005, and, before that, around 1997.

As employers continue to retain existing workers, the probability of increased hiring and wage growth continues to climb. Despite the Fed’s concerns about employment, this is one metric that says things will most likely continue to improve. 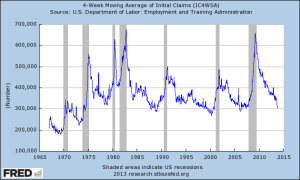 2. The U.S. is now the number-one energy producer, per the front page of the Wall Street Journal.

I’ve written many times before about the advantages the U.S. gets from domestic oil and gas production, but moving to the number-one spot both confirms and expands the potential benefits. The biggest add-on benefit would be the country’s increasing ability to set the swing price in its own markets. By becoming price makers rather than price takers, we could reduce the volatility of energy costs and supplies. Reducing uncertainty in this way would make investing in U.S. manufacturing even more attractive than it already is.

The other primary potential benefit, of course, would be geopolitical. With a reduced need to intervene in energy-related areas, the U.S. would become more effective in negotiating in those areas, and potentially far more effective when we do intervene.

The chart below comes from the WSJ article, “U.S. Is Overtaking Russia as Largest Oil-and-Gas Producer.”

3. The pending Italian political crisis has been defused.

While many countries have long characterized Italian governments as unstable, yesterday the Italians displayed an unexpected level of political maturity. The government survived a vote of confidence, supported by the revolt of Silvio Berlusconi’s party against his demands to bring it down. While this certainly doesn’t solve Italy’s or Europe’s problems, it is both a necessary precondition for such solutions, as well as a very welcome indication that governments can, in fact, act in a wise way. This is particularly welcome news given the situation in the U.S.

As a final note, I would add that, while there is no real news from Washington, DC, there are signs that cooler heads on both sides are at last entering the fray—and that mature consideration of the very real consequences of inaction is starting to replace the righteous anger of doing down those jerks on the other side. I don’t think that actually qualifies as a “good news” point here, but I’ll take what I can get.