I saw an interesting chart the other day, in a piece by the analyst Jim Paulsen, that showed how the U.S. economy had performed net of the government sector—which, to spare you the suspense, was actually quite well. We’re also seeing increasing debate over federal spending cuts: Are they needed in the short term in the U.S., or are they doing more harm than good?

The austerity debate is also well underway in Europe, and it is starting to be resolved in favor of more spending—at least on a political level. That’s a different discussion, though. Here in the U.S., it is both easier and harder to justify less austerity. Easier, in that we can better afford it; harder in that we need it far less.

Let’s take a look at U.S. growth by broad sectors. The economy can be broken down into four components: consumer spending, business investment, net exports, and government spending. The largest, consumer spending, has grown over the past several years as shown below. (All figures are in real terms, so inflation does not affect these charts.) 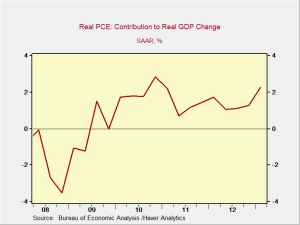 You can see that, since 2010, consumer spending has added 1 percent to 3 percent on average, mostly in the range of 1 percent to 2 percent. Looking at business investment, we see that it has mostly been between 0 percent and 2 percent, with occasional spikes. 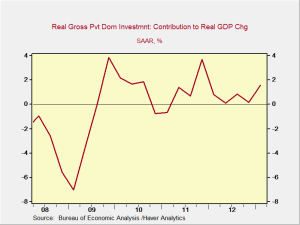 For the last private component, net exports, we see a more modest result, between 0 percent and 1 percent, and recently a negative result. In fact, this is probably due to improvement in the consumer economy, as people buy more imported goods.

When we add these three components together, to get the total real growth in the private economy, we see a much smoother growth path as the twists and turns offset each other. As you can see below, growth has bounced around 2.5 percent pretty consistently, which isn’t bad. So why aren’t we doing better? 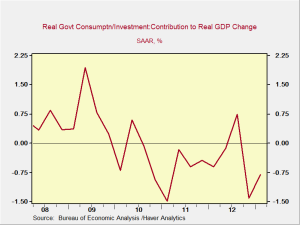 The result is that net growth for the economy as a whole has been slower—around 1.5 percent or so—and this drag will persist as long as government spending continues to decline. 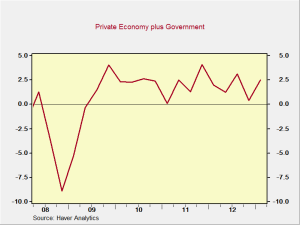 Which brings us to the present. Recent Congressional Budget Office estimates of the deficit for this year are $200 billion lower than they were even a couple of months ago, down to an estimated 4 percent of GDP. With the rapid decline in the deficit, which is expected to drop even further in the next couple of years, Democrats have argued that more spending is needed to push growth higher. This is the easy argument for increasing government spending—that we can afford it, since the deficit has declined more than expected, and that the growth benefit would justify it.

I don’t think this will happen. After the sequester spending cuts fully phase in, however, I expect federal austerity to be limited over the next couple of years, while state and municipal governments, benefiting from the improving economy, step up their spending.

In short, the government sector will move from a drag on the economy to a more neutral factor. If growth stays at current levels in the private sector, the overall economy would grow at a rate of around 2.5 percent on a real basis, pushing down unemployment even faster than it has.

This is the argument against increasing government spending. We don’t need government to step up, we just need the natural correction process to finish—which it’s close to doing. Any increase in spending would only postpone the necessary correction. The private economy is doing well and will probably do better. Once the government finishes getting its house in order, we’ll be even better positioned to continue sustainable growth. Fortunately, the gridlock in Washington, D.C., will probably come to the rescue, stalling any proposed increase in spending until the correction process completes.

Overall, we are getting close to a sustainable private-sector-led expansion. Contractions in government spending, while necessary, are now the major obstacle to a faster recovery, but those contractions should come to an end in the next year or so. While risks remain, primarily from external factors, the U.S. economy continues its healing process and is well positioned going forward.