After a strong January, the markets started February in much the same way but ran into trouble in the middle of the month. In the end, U.S. markets still finished in the black, although international markets were not as lucky. The S&P 500 Index rose 1.36 percent, closing at 1,514, somewhat below its mid-month high of 1,530 but well above its low of 1,487. The wide swings reflected investor recognition of the continuing risks in Europe and in Washington, DC. The results of the Italian elections, pending sequester spending cuts, and uncertainty surrounding the recent Federal Open Market Committee (FOMC) meeting minutes all contributed to the volatility.

U.S. corporate earnings remained strong, with about two-thirds of S&P 500 companies beating expectations and about one-fourth of them missing the mark, which was in line with previous quarters. Valuations continued high based on longer-term metrics, but they also appeared fair based on shorter-term metrics. Given the rise in valuations, investors will likely begin to look to earnings growth rather than multiple expansions as a source for continued stock gains.

Technically, the S&P 500 remained above its 50- and 200-day moving averages, and, despite the dips in the middle of the month, there doesn’t seem to be any technical reason to expect a decline. There does, however, appear to be a resistance level at 1,565, the index’s high-water mark, which it reached in 2007, suggesting that future gains might be challenging. As of month-end, the S&P 500 was only 3.4 percent below its 2007 high.

International markets got hit harder than U.S. markets, reflecting their greater exposure to European political and economic problems. The MSCI EAFE Index posted a loss of 0.95 percent for the month, while the MSCI Emerging Markets Index declined even more, losing 1.35 percent. Among the factors affecting foreign markets were the results of the Italian elections, which were interpreted as a vote against the country’s austerity-based economic stabilization plan. This raised the possibility that the eurozone might face another political crisis.

Events in Asia also contributed to weak performance in the international markets. The Japanese plan to boost inflation and weaken its currency pushed the Nikkei average higher. China, however, led emerging markets downward, as manufacturing slowed and investors worried about central government efforts to contain property prices. Temporarily, both the MSCI EAFE and the Emerging Markets indices fell below their 50-day moving averages. Although both bounced back, this suggests that further weakness is possible.

Long-duration bonds performed very well in February, as the 10-year U.S. Treasury yield contracted from 2.01 percent at the beginning of the month to about 1.9 percent at its end. But the movement wasn’t uniform across the yield curve, as short-term rates actually rose slightly. Treasury yields had been on an upward trajectory since last December, with investors leaving safety assets in search of higher returns. This trend was reversed somewhat last month, as a minor flight to safety occurred. The Barclays Capital U.S. Aggregate Bond Index returned 0.5 percent. On a sector basis, investment-grade bonds performed best, while Treasury Inflation-Protected Securities (TIPS) and mortgages lagged.

Despite market turbulence, the U.S. economy continued to strengthen, as 157,000 new jobs were added in January. Even more encouraging were upward revisions to previously released data, which showed that payrolls had increased at an average monthly rate of 201,000 jobs in the fourth quarter of 2012. This was much stronger than had been thought. Other revisions showed much stronger job growth throughout 2012. Although employment is still well below its historic peak, the trend is clearly moving in the right direction. 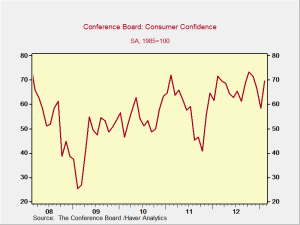 But the news was not all good. Negative factors included tax increases and the steady rise in gasoline prices, which served to reduce consumer incomes. In light of these, the tiny 0.1-percent increase in January retail sales was actually a fairly positive development.

Watch out for Washington, DC

Washington continued to grab more than its fair share of headlines. Although fiscal-cliff tax increases were seemingly absorbed smoothly, sequester spending cuts were scheduled to hit the economy in early March. Despite ratcheting up the rhetoric, politicians on both sides of the aisle seemed resigned to allowing the cuts to proceed. Like the tax increases, however, this will be a one-time hit, which will hopefully be absorbed by growth in other areas.

Less easily tolerated would be a decision by the Federal Reserve to back off of its bond market intervention. The most recent release of FOMC meeting minutes spooked investors, who learned that some committee members had concerns regarding the effectiveness and long-term effects of continued debt purchases. Nevertheless, most members still appear to believe that the economy is better off with continued monetary easing than it would be without it, so it appears that no policy change is imminent.

As previously noted, some of the risks that plagued Europe last year have recently resurfaced. A Spanish government mired in political scandal, a newly split Italian parliament, and a 0.6-percent contraction in Germany’s gross domestic product have all added to uncertainty—both political and economic.

Other areas of the globe also face headwinds. The China/Japan faceoff over disputed territory, North Korean nuclear testing, and the civil war in Syria are all geopolitical risks worth watching. One further concern has been the ongoing efforts by Japan and other countries to weaken their currencies, prompting talk of “currency wars.” Although overstated, the risks of competitive devaluation are real and are likely to remain an issue.

In spite of renewed risks, particularly in Europe and Washington, DC, U.S. stock markets closed the month with a gain. Investors can take comfort in continued U.S. economic growth and the persistent health of U.S. companies. Yet volatility is a reminder of the need for caution. Investors should continue to balance their long-term goals against their ability to tolerate the risks that come with investing.

Disclosure: Certain sections of this commentary contain forward-looking statements that are based on our reasonable expectations, estimates, projections, and assumptions. Forward-looking statements are not guarantees of future performance and involve certain risks and uncertainties, which are difficult to predict. Past performance is not indicative of future results. Diversification does not assure a profit or protect against loss in declining markets. All indices are unmanaged and investors cannot invest directly into an index. The S&P 500 Index is a broad-based measurement of changes in stock market conditions based on the average performance of 500 widely held common stocks. The MSCI EAFE Index is a float-adjusted market capitalization index designed to measure developed market equity performance, excluding the U.S. and Canada. The MSCI Emerging Markets Index is a market capitalization-weighted index composed of companies representative of the market structure of 26 emerging market countries in Europe, Latin America, and the Pacific Basin. It excludes closed markets and those shares in otherwise free markets that are not purchasable by foreigners. The Nikkei Index is a stock market index for the Tokyo Stock Exchange. It has been calculated daily by the Nihon Keizai Shimbun newspaper since 1950. It is price-weighted (the unit is yen), and the components are reviewed once a year. The Barclays Capital Aggregate Bond Index is an unmanaged market value-weighted index representing securities that are SEC-registered, taxable, and dollar-denominated. It covers the U.S. investment-grade fixed-rate bond market, with index components for a combination of the Barclays Capital government and corporate securities, mortgage-backed pass-through securities, and asset-backed securities.