October lived up to its reputation as a tough month for stocks. Political uncertainty, business indecision in the face of the fiscal cliff, and disappointing results combined to hit the equity markets. The S&P 500 Index was down 1.85 percent, while the Dow Jones Industrial Average declined 2.39 percent. The Nasdaq got hit even harder, losing 4.46 percent.

In the U.S., corporate earnings appeared to have flattened out. Of the 245 S&P 500 companies that have reported as of this writing, 71 percent have beaten estimates. Nonetheless, the overall blended earnings growth rate has actually declined 1.2 percent—the first such decline in 11 quarters. Additionally, only 36 percent of companies have reported sales that have beaten analyst estimates. Revenue may have been negatively impacted by weaker economic activity overseas. The U.S. health care, consumer staples, and financials sectors surprised to the upside, while utilities earned less than analysts had expected.

Slowdowns and declines in both top and bottom lines have been cited as the causes of reduced investor appetite for U.S. equities over the past month, exacerbated by ongoing political and economic uncertainty. Even as earnings have moderated, however, stock valuations remain at historically high levels, suggesting that caution is warranted—particularly because earnings estimates for the fourth quarter of 2012 have also come down (see chart). 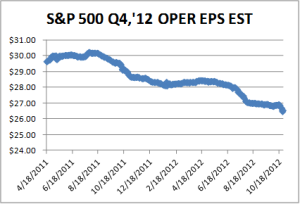 International markets did better than U.S. markets, with the MSCI EAFE Index actually up 0.83 percent for the month. The MSCI Emerging Markets Index, however, was down 0.73 percent—though less than the U.S. markets. The relatively good results for the EAFE appear to be due to economic reports that were not as bad as had been expected, as well as to progress in resolving the European debt crisis. Emerging markets benefited from this progress but also suffered from the continuing uncertainty in the U.S., resulting in a middling result. Technically, the EAFE is just at its 50-day moving average, while the Emerging Markets index is below its 50-day and close to its 200-day moving averages. Again, these results suggest that continued weakness is possible.

With the announcement of QE3, Treasury yields rose from 1.63 percent to 1.69 percent by month-end. This was consistent with what we’ve seen following other quantitative easing announcements, where Treasuries rallied beforehand and market participants sold into the Federal Reserve’s buying afterwards. Likewise, 30-year fixed mortgage rates, which bottomed at the end of September, began to rise in October. For new homebuyers or homeowners looking to refinance, rates remain near their most attractive levels in recent memory.

Even as Treasuries sold off, high-yield bonds continued to rally, with the effective yield of the Bank of America Merrill Lynch High Yield Corporate Master II Index falling below 6.5 percent. The spread of the index over Treasuries also fell, to around 4.5 percent. Though above levels seen in the period from 2004 to 2007, spreads are much less attractive now than they were at the beginning of 2012, when they averaged a bit more than 6 percent.

U.S. gross domestic product (GDP) grew 2 percent annualized in the third quarter, according to initial estimates. Strong consumer spending in September may even result in an upward revision to GDP growth in the second estimate. Residential investment, caused by a rebound in the housing market, helped the U.S. economy expand, as did an increase in federal government spending on defense. This was the first time in eight quarters that government spending was a positive contributor to growth.

Weak manufacturing output has been a drag on global growth. The J.P. Morgan Global Manufacturing PMI has been in negative territory since June, although it was less negative in September than it had been in August. Manufacturing activity in the U.S. appears to be slightly better than the world average, having rebounded into positive territory in October, but it is no longer buoying growth as it did in 2010, 2011, and the first half of this year.

Year-to-date, growth has been about consumer spending, as retail sales have remained strong, with an especially strong print in September. Consumers have dipped into their savings to maintain the growth rate, but savings levels are still reasonably healthy. Businesses, on the other hand, have reduced spending and investment. The difference between the two appears to be the greater focus on the pending fiscal cliff (i.e., the package of tax increases and spending cuts scheduled to take effect, absent Congressional action, at year-end) by businesses.

Politics and the election

With President Obama and Governor Romney both presenting very different views on taxes and regulation and with the race very close, the uncertainty around the election has led many businesses to postpone decisions on investment and hiring. Business uncertainty and unemployment are strongly related, and it is hoped that the election results will reduce some of that uncertainty and spark more hiring.

Before it does, however, the fiscal cliff must be resolved. Should the fiscal cliff take effect, taxes will increase significantly, and the country will likely move into recession, potentially a severe one. As noted previously, businesses are neither hiring nor investing while that prospect looms, and it is possible that consumers will also become more cautious, as they become more aware of the risks.

Reasons for caution and optimism

Markets remain at high levels, suggesting that they expect the uncertainty to be resolved favorably. Although there are risks, there is a strong incentive for Congress to at least postpone the debate over the fiscal cliff until the new government can make its decisions.

Uncertainties in Europe seemed to recede in October. As in the U.S., they remain, but the issues have been identified, and the governments have strong incentives to resolve them. Many of the most serious problems now have institutional frameworks for resolution—something that had been missing—and the European Union appears well positioned to come to grips with its difficulties.

Overall, while risks remain, and the downside could be financial, the upside potential is also very much present. Cautious optimism remains the appropriate stance.

Disclosure: Certain sections of this commentary contain forward-looking statements that are based on our reasonable expectations, estimates, projections, and assumptions. Forward-looking statements are not guarantees of future performance and involve certain risks and uncertainties, which are difficult to predict. Past performance is not indicative of future results. Diversification does not assure a profit or protect against loss in declining markets. All indices are unmanaged and investors cannot invest directly into an index. The S&P 500 Index is a broad-based measurement of changes in stock market conditions based on the average performance of 500 widely held common stocks. The Dow Jones Industrial Average is a price-weighted average of 30 actively traded blue-chip stocks. The Nasdaq Composite Index measures the performance of all issues listed in the Nasdaq Stock Market, except for rights, warrants, units, and convertible debentures. The MSCI EAFE Index is a float-adjusted market capitalization index designed to measure developed market equity performance, excluding the U.S. and Canada. The MSCI Emerging Markets Index is a market capitalization-weighted index composed of companies representative of the market structure of 26 emerging market countries in Europe, Latin America, and the Pacific Basin. It excludes closed markets and those shares in otherwise free markets that are not purchasable by foreigners. The Bank of America Merrill Lynch High Yield Master II Index tracks the performance of U.S. dollar-denominated below-investment-grade-rated corporate debt publicly issued in the U.S. domestic market.