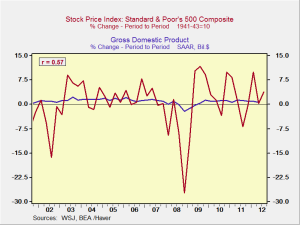 That extra 40 percent leaves a lot of room for factors not explained by the U.S. economy, though. One principal reason why this decoupling of the stock market and real economy occurs is that companies—especially the large-cap companies that constitute the S&P 500—have much greater exposure to foreign economies than the U.S. economy does as a whole. An article on page B1 of today’s Wall Street Journal, “US Earnings Fall Victim to Europe’s Woes,” addresses this directly, making the point that although U.S. sales are growing, slowing growth in China and outright decline in Europe are masking that growth at the corporate level.

The change correlation also does not address the difference in the sizes of the changes. As you can see from the chart, the change in the stock market has often been much larger than the underlying change in the economy.

In my opinion, much of the recent market weakness has come from the below-expectation performance of corporate earnings and downward guidance by companies, which has in turn been driven by slowing growth in the rest of the world. With profit margins at or close to record highs, not to mention a long string of earnings increases, a decline should not be a surprise, but it always is. What is important to understand, though, is why the earnings are declining and what that says, or doesn’t say, about the U.S. economy as a whole.

For example, weakness in European or Chinese demand, although it would hit corporate profits of U.S. companies and might adversely affect employment related to those exports, would be a relatively small part of the U.S. economy and thus would have a small effect. Likewise, an increase in average worker compensation in the U.S.—which would also negatively affect corporate earnings—would be a positive for the U.S. economy.

In short, although I am closely following the performance of the U.S. markets, I consider them to be different from, and not directly linked to, the economy as a whole. Don’t confuse the tail with the dog.

All indices are unmanaged and are not available for direct investment by the public.