I have been doing some detailed review work on the economy, both historically and going forward, for my presentation at Commonwealth’s upcoming National Conference. As part of that, I put together a chart that I thought was worth sharing as we move closer to the election. The blue line is business uncertainty, and the red line is the U-6 unemployment series. Note how changes in the blue line lead changes in the red line. 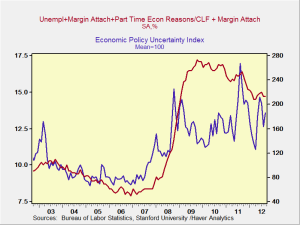 I have talked previously about how uncertainty is negatively affecting the U.S. economy and, in particular, about how it is causing companies to put off decisions about investment and hiring. In fact, today’s Wall Street Journal has another story to this effect: “Manufacturers’ Fears of ‘Fiscal Cliff’ Put Brakes on Hiring, Survey Says” (p. A2).

Because the data I have reviewed so far has also been survey-based, and therefore pretty anecdotal, I had the idea of looking at actual unemployment versus business uncertainty, and I found the match to be quite striking, per the chart above. As usual, it is the direction of change that is most important, and you can see a clear link between changes in uncertainty and unemployment, with a lag of several months.

I will insert the required “correlation is not causation” caveat here, but in this case, theory—and even common sense—suggests there is a causal link. Moreover, this causal link can reasonably be extended to suggest that as uncertainty declines, so will unemployment as companies become more willing to hire.

In the U.S., the election and fiscal cliff are the biggest sources of uncertainty, and the election at least will be resolved shortly. Chances are growing that the fiscal cliff will be as well, but even if it is not, the economic damage done in the short term will be offset by the fact that the deficit problem will be largely eliminated. Going off the fiscal cliff may actually reduce uncertainty; it won’t eliminate the short-term damage, but it might hasten the recovery in the midterm.

Energy prices are another significant source of uncertainty, and the U.S. energy picture is on the right path. The Financial Times has an article on page 15 today, “US poised for boom in crude oil exports,” suggesting that the U.S. energy import/export balance continues to improve. I talked about this in my Economics and Politics webinar here on the blog a while ago, and the situation is even better now. Once that starts to affect gas prices, another source of uncertainty can be expected to decline.

Finally, from a consumer perspective, the housing recovery continues, as I wrote yesterday. Even absent a recovery in prices, the fact that values are no longer declining means uncertainty has gone down.

Uncertainty is a statistic I will be paying attention to throughout the next several months. I expect it to decline, and if it does, it could mean a better economic environment overall. At the moment, I believe the signs are good.