I want to highlight an interesting chart put together by Pete Essele of Commonwealth’s Asset Management and Research teams. Pete does excellent work in a variety of areas, but he is particularly good at putting together charts and graphics that make important points in very clear ways.

What we have today is a chart about U.S. employment. The chart has a detailed explanation, but the important thing it shows is that employment growth has slowed and is now in balance on a monthly basis. This is a big deterioration from the past year or so. 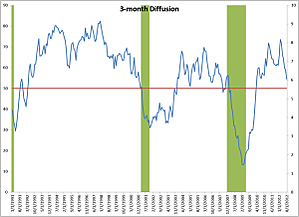 The picture looks a bit better on a three-month average basis, but this is because the stronger reports of a couple of months ago are still being factored in. Given recent weakness, I feel the monthly chart is the better indicator, and based on that, growth in employment has certainly slowed. The question is why.

Consumption is still growing, albeit slowly, and the U.S. is relatively less exposed to foreign weakness because exports are a relatively small part of the economy. That leads me to suspect that a major factor in the slowing employment growth is unwillingness by business to invest due to uncertainty. The Financial Times (FT) has an article on page 4 that addresses this: “Businesses feel fettered by rise in red tape and ‘fiscal cliff.’” This is a problem that will not be going away until after the election, at the earliest.

Even after the election, though, changes will bring slower growth than we have seen in the past. The deficit will have to continue to be cut, for example; just take a look at “Test for Obama as Deficit Stays Over $1 Trillion” on the front page of the New York Times (NYT), which lays out the political challenges of the needed cuts, and a chart on page A13 that summarizes the candidates’ proposals. There is also a good op-ed piece in the NYT, “Spreading the Wealth Won’t Stop” (p. B1), that talks about the role of the federal government going forward. Hint—it isn’t going away.

Even though the U.S. economy continues to recover, with the most recent positive news being the ongoing housing recovery—“Home Prices Rise Again, This Time on the Low End” (NYT, p. B1) and “Housing Market Displays New Vigor as Prices Rise” (Wall Street Journal,front page)—there are existing headwinds to offset them, like necessary governmental funding cuts, eventual retraction of Federal Reserve stimulus measures, and demographic factors as the baby-boomers age. This all means that slower growth than in the past is the most probable outcome by far.

The good news in all this is that even given the risks and uncertainty out there, we are still not doing that badly. If things get worse, of course, things will get worse. But as things get better, which is more likely over time, there is a chance for disproportionate recovery as the economy starts to gear up. We may not get back to the levels of past recoveries, but we should start to do much better than we are right now.