and tagged Politics and the Economy, Yesterday's News

The meta-story today is again the Paul Ryan candidacy and the presidential race. The Financial Times (FT) leads with “Obama uses heartland visit to launch first attack on Romney running mate,” the Wall Street Journal (WSJ) opens with “Presidential Race Snaps Into Gear,” and the New York Times (NYT) has a front-page picture and “Medicare Rises As Voters’ Issue in GOP Gamble.”

Other Ryan stories include “Everything Wall St. Should Know About Ryan” on page B1 of the NYT, which states that he actually may not be very pro-financial industry; “Ryan’s Record Shows Flexibility on Policy” on page A4 of the WSJ, which notes that Ryan voted for the Troubled Asset Relief Program (TARP), the Bush-era Medicare prescription drug benefit extension, and an early version of the auto bailout; and “Obama tries to harvest votes in Iowa” on page 4 of the FT, which has the subtitle “The president blames Paul Ryan for holding up the farm bill.”

The general theme of the coverage is that Ryan’s views on Medicare will present a political challenge with elderly voters, particularly in the swing state of Florida. Another theme is attacking Congress for gridlock, such as with the farm bill, and conveniently blaming Ryan because he is a prominent Congressman. As I said yesterday, I am not sure where the politics on federal deficit versus Medicare benefits will end up. Clearly, U.S. spending is unsustainable, but equally clearly, benefit recipients are a majority and vote at disproportionate levels. Given what looks like a close election, how the elderly split on deficit reduction versus Medicare could end up being the issue that decides.

No other meta-stories out there. The NYT runs with a story on how high-frequency trading is hitting diminishing returns, with “On Wall Street, The Rising Cost of Faster Trades”—another reason to start optimizing the system for strength rather than speed. Obituaries for Helen Gurley Brown make the front page of the NYT and page A6 of the WSJ.

One non-paper story that I think bears mentioning is the strong retail sales figure that came out today. The monthly increase of 0.8 percent was the first after three straight declines. Stripping out the most variable sectors—cars, gas, and building materials—the increase was even better at 0.9 percent. Another encouraging point is that all categories showed solid increases.

More good news comes from a Commonwealth employment metric developed by Pete Essele of our Research department. Rather than looking at the raw numbers, Pete uses a sector-based diffusion index that measures how many sectors show increasing versus decreasing employment. As you can see from the chart below, current levels of employment change are in the very healthy range on a historical basis. 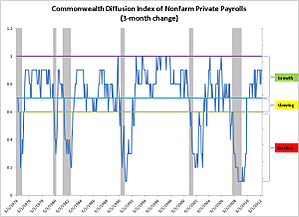 Between these two indicators—and others—although we have certainly seen a slowdown over the past couple of months, the future does not necessarily look that bad.

Have a great day!