Why the Bank of America Deal Is Good for Everyone

The headlines today are all about the deal between Bank of America and the government. After months of negotiation, the bank will pay about $17 billion to resolve allegations that it didn’t follow the rules for residential mortgages before the financial crisis.

No company likes to pay out billions of dollars, and BofA had a good case that it didn’t do nearly as much wrong as the government claimed. (Many of the allegations involved actions committed by companies that the bank acquired at the government’s urging during the crisis.) Nonetheless, the BofA deal should be a good thing for the bank—and the rest of America.

Back to normal as banks loosen up

You could think of this as the last hurrah of the crisis, the bell signaling that the banking industry is back to something approaching normal. With the last major uncertainty nearly resolved, banks are now free to focus on lending money to new customers, to concentrate on the future rather than trying to justify and defend past decisions.

You can see evidence of this change in both surveys of lenders and actual deals done. Across the board—business, consumer, and mortgages—lenders are loosening their standards:

On the demand side, net, 30 percent of banks reported an increase in demand for business loans, the highest in more than two years, and total business loans outstanding are now just below the previous peak. Mortgages are also showing increased demand, which should be consistent with housing sales growing at about 10 percent per year.

You may well wonder if this is really a positive sign, or just a return to the kind of unsustainable debt-driven “growth” that got us into trouble in the last decade. In fact, the private sector has made great progress in paying off the previous debt and is now in a position where this borrowing is both reasonable and helpful.

Let’s look at households first. Debt compared to gross disposable income has come way down. Although still above 1990s levels, lower interest rates have brought debt service levels even lower than they were at that time, similar to those of the early 1980s. For households, adding debt shouldn't prove unsustainable or an undue burden. 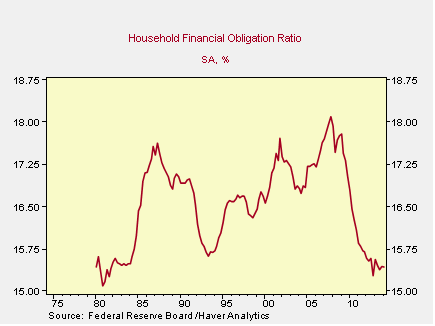 The picture for businesses is a bit more mixed, due primarily to the large amounts of money companies have borrowed to buy back shares. Financial institutions have delivered even as nonfinancial corporations have borrowed more, but the net effect has been to reduce the overall amount of outstanding debt. 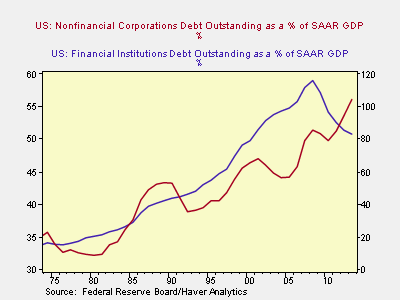 These numbers, of course, reflect the private sector only, but that's the vast majority of the economy. Although we continue to struggle with government debt—while the federal deficit is down, it remains far too high, adding to the debt burden every day—this is not the primary driver of the recovery.

Overall, the resolution of the banks’ war with the government should clear the decks for an accelerating recovery. In that sense, the Bank of America deal will help move matters along, to everyone’s benefit.