Why Did My Investments Do Badly in 2014?

I’ve had a lot of conversations recently about 2014 portfolio performance. Investors are reviewing their results, comparing them with the performance of U.S. stocks, and asking the question in the headline: Why did my investments do badly last year?

It’s a reasonable question, but let's keep things in perspective: Any year you make money—as most investors did—isn’t actually a bad year. You might want a better year, to be sure, but 2014 wasn’t bad for most. 2008 was a bad year.

Still, last year felt bad in light of what investors had expected. With the U.S. market up and the economy recovering, we expected a strong showing from our investments.

It all comes down to diversification

To understand why our investments may have disappointed, we have to dive into how investment portfolios are built. The core idea here is diversification—not putting all your eggs in one basket. This strategy helps you avoid getting caught in a particularly bad area, but it may also limit your exposure to particularly good areas.

Most years, this works well. Looking at the chart below, you can see that, from year to year, the best-performing asset classes vary significantly, and the performance of individual ones bounces around quite a bit. 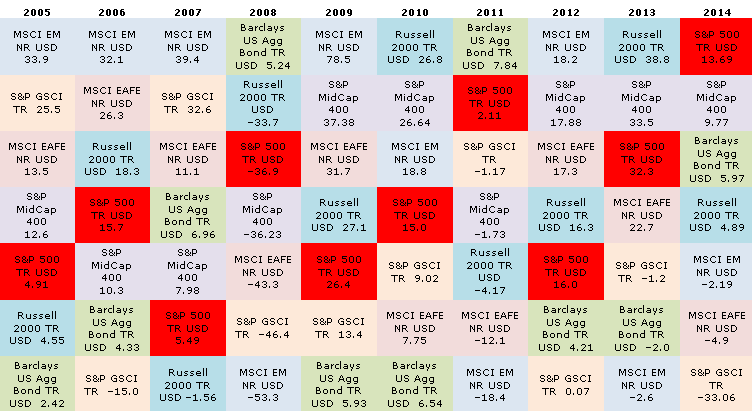 Emerging markets, for example, went from best to worst from 2007 to 2008, and back to best in 2009. Given this volatility, and the impossibility of picking the best performer ahead of time, it makes sense to spread out your bets in the expectation that you’ll benefit from the best and get hurt less by the worst.

The underlying assumption here, though, is that most asset classes will perform well and several will perform similarly. By and large, this has been the case. In all but two of the past eleven years—2008 and 2011 being the exceptions—several asset classes have generated double-digit returns, and relatively few asset classes actually lost money. A diversified portfolio would have done well with that many gainers and few losers.

But, in a year when things go well in only one area and others don’t fare so well, you will have less exposure to the good area and substantial exposure to the bad—and underperform overall, especially with respect to the area of strength.

An outlier year for U.S. stocks

With this understanding, we can start to see why 2014 was so disappointing. Only two asset classes, both U.S. stocks, did well. What’s more, we saw losses in several asset classes, which pulled down relatively low returns even more. The less exposure you had to U.S. stocks, the worse you did.

Over time, investing more in large U.S. companies has not been the best strategy, even though it did outperform in 2014.

The bottom line: diversification works most of the time

2014 was an exceptional year in many ways. Stocks of large U.S. companies were the only ones that did well, and most other investments did not do less well; they did poorly. Any diversified portfolio would underperform in that situation, even as it would have potentially outperformed in a more typical year.

In the end, though it’s easy to be disappointed by 2014 performance, it is just one of the inevitable outliers resulting from a diversified strategy. Over time, a diversified approach should offer both superior performance and reduced risk compared with a more focused strategy.