Where Does the Fed Go from Here? 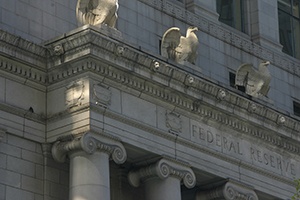 Today, the Federal Reserve’s two-day meeting on monetary policy will come to an end. With a news conference already scheduled, markets will be turning toward Washington to see what the Fed is doing today—and where it is likely to go from here.

What we can expect today

We can make some pretty good guesses about today. The Fed has been teeing up the start of so-called quantitative tapering (or QT). This means that, in a reversal of quantitative easing, the Fed will sell securities instead of buying securities to keep interest rates low.

Nope—just kidding! The Fed will actually keep buying securities to keep interest rates low but will buy less of them now. The idea is that, as it receives interest payments and as bonds mature, the Fed has been taking that money and reinvesting it. Now, however, it will reinvest only some of that money. Indeed, the Fed will continue to buy. But by not replacing all of the securities that mature, the balance sheet will decrease—very slowly.

When you look at the market effects of this, the words “continue to buy” and “slowly” are key. Yes, the Fed is stepping back, but with baby steps that are much smaller and slower than the steps forward were. These tiny steps have been well communicated to markets and are fully expected. The Fed has done everything it can do to make sure the markets know what is coming and that they are not worried. It appears the Fed's efforts have succeeded, so don’t expect much, if any, turbulence at the announcement.

Another good guess we can make for today is that the Fed will not be raising interest rates. Despite signs that weak inflation data may have bottomed, we don’t see it rising yet. This is one of the major worries for the Fed, so any action will remain dependent on inflation data. To its credit, the Fed continues to operate in a “do no harm” mode, and there are no signs that inflation is rising fast enough to drive further rate increases.

Looking forward to tomorrow and through the end of the year, the balance sheet reduction plan will likely be on autopilot. So, we should not expect news here unless something goes wrong, with either the program or the economy. Rates, however, will remain subject to evolving data and, especially, to politics.

The evolving data suggests a December rate hike is coming. With inflation starting to tick up, the labor market getting tighter and tighter, and a weak dollar pushing import prices up, the fundamentals are likely to start driving inflation higher. The effects of the hurricanes, although temporary, will also add to this through December. If the Fed is looking for data to justify a rate hike (also likely), it will probably get some.

The other December event of note is that the debt ceiling will be up for debate again, along with other budget and tax-related items. Politically, December looks to be a tough month for any monetary policy actions. Given that—and the fact that there will likely be better inflation data (although it is unlikely to be conclusive)—it is much more likely the Fed will decide to punt again into the new year.

All of this is contingent, of course, on what happens with the vacant Fed seats. If the administration makes appointments to those seats, or if President Trump decides on a candidate for the chairman’s seat, this could also keep the Fed on the sidelines in deference to the new members until they are seated.

This is an unusually ambiguous period for the Fed, for reasons political, institutional, and economic. Expect the Fed to do what it says—start the balance sheet reduction—but little else until the air clears a bit.