What Not to Worry About 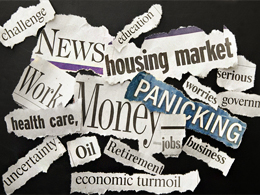 I’ve been giving a presentation recently, developed during the worst of the first-quarter stock market pullback, that discusses what we, as investors, should worry about and why. It may seem obvious, but in fact, most people tend to focus on the wrong things.

What were investors worried about five years ago?

Let’s start by talking about what not to worry about, taking the past five years as an example. At the start of the period, high oil prices were a major concern. Goldman Sachs published a paper declaring that oil was headed for $200 per barrel, and others were calling for peak oil as well. The idea was that we had discovered all the cheap extractable oil there was, and that bidding wars would drive up prices for the remaining, dwindling, supplies.

Five years ago, we were worried about a weak dollar. There was quite a bit of speculation about a dollar collapse, leading to hyperinflation and rains of fire, to the extent that I wrote about it regularly. Many saw the U.S. on the brink of obsolescence, about to be eclipsed by faster-growing countries, with the dollar and its reserve currency status as an unavoidable casualty.

The biggest of those threats, of course, was China. With wise leadership, careful planning, and cheap labor and capital, China was poised to take over the world, replacing the U.S. as the superpower. Five years ago, it seemed inevitable and unstoppable.

As usual, the truth lies somewhere in the middle. Looking at a longer time horizon, oil prices are simply back to the inflation-adjusted levels of the 1990s, not at crisis lows. The dollar is about in the middle of its range over the past 30 years, not crazy high or low. And China, though not skyrocketing the way it had been, is unlikely to collapse (at least economically), given its growing consumer base and large currency reserves.

Don’t look to the headlines

Once again, just like five years ago, we're worried about the wrong things. Headlines don’t typically convey the real issues, as anything so widely known is likely to have a correction under way. Fracking was incubating during peak oil. China’s growth was peaking when worries about its dominance were most intense. And the weak dollar helped give the U.S. the economic impetus to recover, driving a strong dollar several years later.

So what should investors worry about? What are the real threats to our portfolios, and what can serve as early warning signs of trouble? Interestingly, the analysis I developed during the drawdown earlier this year has held up, which means it might well be useful in the future. We’ll discuss it over the next couple of days, so be sure to check in!