In this last post on rising interest rates, let's talk about what everyone really wants to know: What do rising rates mean for our investments? As we discussed yesterday, a rate hike probably isn’t imminent, but it’s certainly worth thinking about to get ahead of the risk.

At this point, rising rates actually look like a positive for the stock market, as they reflect a healthier, more normal economy. This chart, which I’ve posted before, shows that stocks typically perform well during periods of rising rates, as long as rates are below about 5 percent—which, by no accident, is the natural level we identified in Part 1. 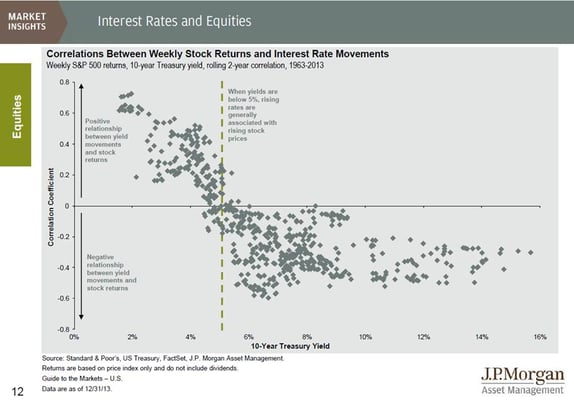 Bonds are the securities most exposed to interest rate changes. Coupon payments are generally fixed, so they’re hit directly by the higher level of future discounting that comes with higher rates. Simply stated, when rates go up, bond prices go down, with bonds that mature later getting hit harder than those that mature sooner. Long is bad when rates rise, if you sell.

So, although bonds are exposed to interest rate risk, it can be managed. Bonds also present some opportunities, as any payments can be reinvested for a higher return as rates rise. For those worried about a capital loss, though, managing the duration of your bonds, or owning them directly, can mitigate that risk. (We actually have a team here at Commonwealth to help investors who wish to directly own bonds.)

This category includes real estate investment trusts (REITs), master limited partnerships (MLPs), preferred stock, and other financial assets that people buy primarily for the dividend. These will perform somewhere between stocks and bonds, with the growth exposure—possibly good for REITs and MLPs, not usually so good for preferred stock—offsetting the interest rate risk to a greater or lesser extent. It’s not usually possible to manage duration with these assets, however, so investors have one less tool to defend against rate risk.

Rising rates, at least at this stage of the cycle, can be risky for parts of your portfolio, but they also have upside effects. A rate increase is something to be cautiously welcomed, as it represents a real recovery for the economy and a more stable foundation for future growth. It will require planning and perhaps some changes to your current holdings, but the risk is definitely manageable while we await the new opportunities.