What Does the Election Mean for Your Portfolio? 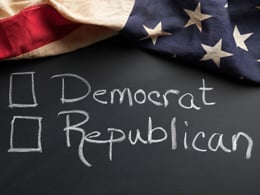 There’s no escaping coverage of the presidential election—what it means, whom to vote for, whom not to vote for. Many of us are deeply engaged in the process and passionately committed to one of the candidates.

At the same time, one of the most important personal consequences of the election will be its effect on our portfolios. Presidents come and go, but your retirement is on the horizon regardless of who’s elected.

So let’s spend some time thinking about what the election will mean for our investments. We can look at this in two ways: short-term effects and longer-term effects.

In the short term: some volatility to be expected

So far in this election, markets have been reacting primarily to uncertainty. The real concern is whether a candidate’s proposed policies would disrupt the economy if he or she were elected. For Hillary Clinton, the Affordable Care Act, aka Obamacare, is the only major policy area where this might be the case, and any change to that legislation would require Congressional action (which would likely be constrained by the Republican House).

Donald Trump has discussed several policy issues that could impact the economy, most notably his potential actions on trade, whether imposing tariffs or pulling out of existing treaties. In this area, it’s possible that the president could act unilaterally, bypassing Congressional constraints. This is a significant part of what makes markets uneasy about a Trump presidency.

Of the two candidates, Clinton is viewed as more predictable, almost a continuation of the Obama presidency. Markets seem to feel they know what she would do in office and are more or less comfortable with her. Trump, on the other hand, is viewed as introducing more uncertainty on economic policy, among other things. This isn’t necessarily a criticism—in many ways, policies that diverge from the Washington consensus are the point of Trump’s campaign.

In the run-up to the election, the more realistic a Trump victory seems, the more market volatility we’re apt to see. As I’ve written before, if mainstream forecasts start to suggest a significant chance of a Trump win, we can expect the market to take note. Short-term reactions are certainly possible as the race continues, but as we’ve seen in the past, such movements typically have very little to do with long-term results.

In the long term: divided government tends to please markets

Longer term, the effect of the election will come down to fundamentals and how effective the eventual president is in pushing through his or her policies. There’s a big difference between what a president intends to do and what he or she can actually accomplish once in office. The latter depends on the composition of Congress and the president’s ability to work with both houses, regardless of which party is in power.

Here we have some data to analyze. At this point, we know that Democratic control of the Senate is possible, and Republican control of the House is likely. No matter who clinches the presidency, divided government is very likely to continue. Historically, divided government has meant that any legislation passed had broad support; parties couldn’t push through partisan agendas, which tends to be good for the economy.

The biggest risk for investors: overreacting

After the drama of the election, the new president will have to find a way to govern and will be judged on the success of his or her programs. Everyone will have an incentive to work together, despite the rancor we’re now seeing. History shows that mixed governments tend to be good for the markets, and it’s safe to say that’s what we can expect.

Despite the very real short-term risk of volatility and the potential policy uncertainties, the likely long-term outcome of the election is continued economic growth and consequent market gains. It’s normal and reasonable to react to short-term worries, but in the long run, any damage from the election is likely to be limited.

In fact, in many respects, politics is now acting as a headwind for the economy, and we can reasonably expect a bounce after the election. In the end, the current tumult should have little bearing on longer-term results, and the most damaging thing you can do to your portfolio is overreact.