Tremors in the Housing Market 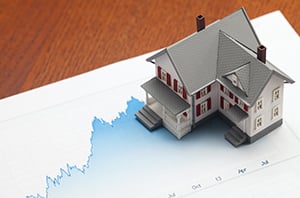 The housing market has shown exceptional strength after rebounding from the sharp but brief decline in the early months of the pandemic. Many factors have contributed to this—exceptionally low mortgage rates, aggressive stimulus, and the need for more housing as work and childcare were brought home. Now, all of these factors are diminishing while the cost of living is rising due to higher inflation. As a result, the housing market might be heading for a slowdown.

Fortunately, there might be some good news hidden in what appears to be bad news: a slowing housing market could take some air out of the inflation bubble and ease pressure on the Fed to aggressively raise rates.

Housing Supported Economy Through the Pandemic

Covid-19 led to a significant decline in economic activity and a spike in unemployment in the spring of 2020. There was some weakness in the housing market early in the downturn; however, housing construction, sales, and home values rebounded very quickly by the summer of 2020. 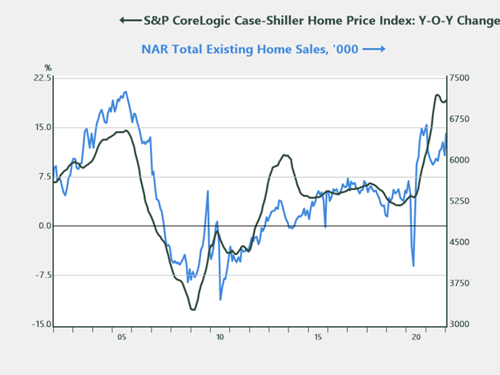 Mortgage rates had already peaked in late 2018 but plunged to historic lows when the Fed aggressively cut rates early in the pandemic.

Between rock-bottom borrowing costs, plentiful stimulus support, limited supply, the need for more housing, and greater flexibility in terms of housing location, there was a confluence of support for the housing market. Weakness in the housing market was a major contributor to the great recession of 2007–2009, but strength in the same market was the primary reason for the shortest recession on record in 2020.

Cyclical Forces May Act as Headwinds

After all the gains of 2020 and 2021, 2022 is set to be a more challenging year for the housing market. With inflation running high, consumers are starting to feel the pinch and getting nervous about their financial security. This is being reflected in the University of Michigan’s consumer sentiment survey, which has declined to levels last seen in 2011 and is not far from the 2008 lows. Home prices have risen an average of about 30 percent since the pandemic struck in 2020. We are near full employment and wages have risen as well, but they haven’t kept pace with home prices. Housing affordability has deteriorated as mortgage rates have risen rapidly. And as the chart below suggests, further gains in home prices might be a challenge. 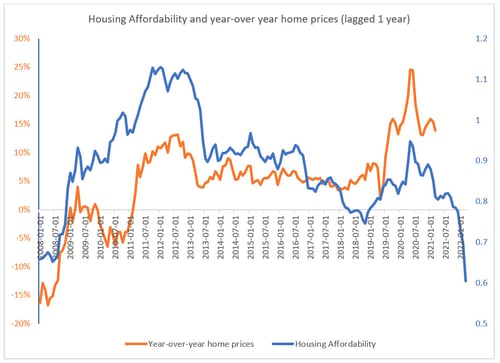 The cyclicality of the housing industry portends a forthcoming decline. But there are structural factors that could act as a cushion and limit the downside. The most critical one is the historic supply-demand imbalance. Subdued home construction activity after the great financial crisis has resulted in an acute deficit in housing stock, with the current inventory at around half the long-term average. This undersupply is coming up against increasing demand from millennial buyers who accounted for more than half of all home-purchase applications in 2021. While higher home prices and mortgage rates might crowd out individual homebuyers, a tight rental market will sustain demand from institutional buyers that are less interest rate sensitive.

Slowdown Not a Crisis

If mortgage rates stay sustainably above 4 percent, it could materially dampen housing demand. Between high home prices and higher interest payments, homeownership will be beyond the reach of many. But the environment today is very different from back in 2007 when home inventory was much higher, lending standards were much lower, and household balance sheets were less robust. Thus, higher mortgage rates could ease the frenzy in the housing market but may not lead to a wave of defaults and foreclosures or a large-scale decline in home prices.

How Will the Fed React?

Housing is a critical component of our economy and accounts for nearly one-third of the core Consumer Price Index inflation basket. Should home prices stabilize, if not fall, it could translate into lower readings for core sticky inflation. This will afford the Fed more flexibility to go easy with the rate hikes and possibly even pull off a soft landing for the economy.

Thus, the housing market is likely heading for a slowdown as home values and mortgage rates make homeownership beyond the reach of many. But tight supply and strong demand will ensure that this is a modest slowdown versus a steep decline. Homebuilder optimism might decline, while home buyers will welcome a pullback. Finally, a cooling housing market could be the window for the Fed when it needs to start supporting a slower-growing economy again.