The Truth Behind the 7-Year Market Cycle

One of the things I’ve been meaning to do this summer is take an analytical look at the Shemitah, a quasi-biblical prophecy that predicts a crisis every seven years—which means the U.S. is due for “financial ruin” this year.

As regular readers know, I don’t have a lot of patience for unfounded calls for disaster (although I’m completely on board with well-founded calls for the same). What lends this story some plausibility is that the Shemitah folks can actually point to a seven-year cycle in U.S. financial markets over the past couple of decades. Not that I really believe God is smacking us every seven years, but there does appear to be something to the theory.

As often happens, if you wait long enough, someone else does the work for you. In this case, it’s a report from Nationwide Insurance, which shows the same seven-year market cycle overlaid on a reasonable explanatory variable: an increase in interest rates by the Federal Reserve. 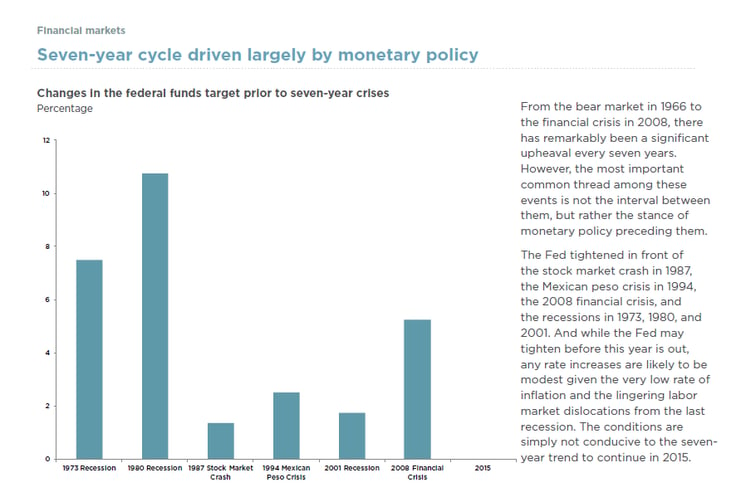 Source: Federal Reserve Board of Governors

Rising rates make sense as a potential trigger for financial turbulence, and if you look at this chart closely, it may well indicate future trouble, though probably not this year. Historically, the fed funds rate needs to increase by more than 1 percent before we see a serious reaction.

So, where are rates headed?

Right now, the Fed is still debating whether (not when) to make the first rate hike, and September looks like the very earliest possibility. We likely won’t see a large increase in rates this year, and we may not see any increase at all. If it doesn’t happen this year, well, there goes the seven-year cycle.

Bigger picture, when the Fed increases short-term rates, longer-term rates usually follow. This time may be different, at least for a while, as both the European and Japanese central banks continue to buy bonds to keep rates low. The effects of this are flowing into the U.S. and keeping rates here low as well, which should continue. The seven-year cycle may end up stretching to eight or even nine years.

The trouble with magical thinking

As you can see, examining the underlying causes of a pattern may be a better way to evaluate the future than simply looking at history and extrapolating out from there. I find that many of the more extreme views, positive and negative alike, have this flaw. Magical thinking suggests that recent experience is the best indicator of the future—and therefore everyone continues to buy or sell. This is how both bubbles and crashes come about.

I’m not saying we don’t have challenges and concerns, or that we won’t see a pullback this year. We might. But the underlying facts remain supportive, and the time to look for serious trouble is when those facts start to decay.

This morning’s jobs data suggests such decay isn’t imminent. Job growth continued at strong levels in June but wasn’t fast enough to panic the Fed. The market is acting rationally in response to news such as the Greek crisis. Even as the Fed debates rate increases, monetary policy remains very stimulative.

We will certainly face trouble in the future. When we do, though, it won’t be because of magical cycles or Mayan apocalypses. Our troubles will be of our own making, which means they’ll also be solvable by us.