The Trump Bounce and the Monthly Market Risk Update: November 2016

Although many were predicting a significant pullback on Mr. Trump’s election, we, in fact, got a fairly significant advance. What’s up with that? I suspect there are several reasons.

Whatever it was, clearly the financial markets are not upset by the Trump victory.

On a deeper level, however, I think the reaction speaks to the fundamentals of how markets and the economy work. I have written many times about what creates a bear market. You almost always have a recession, which we don’t, as well as other supporting factors, such as rising oil prices and interest rates, which we also don’t have. Current market risk factors, which I update below, are also generally on the positive side, although risks are rising. In other words, on a fundamental basis, there simply does not appear to be a reason for the market to pull back in a significant way. That doesn’t mean it can’t happen, but it does mean it is less likely.

The Trump news, therefore, hit a market that was reasonably solid and bounced. You could take this as further evidence of the market’s strength given that we just experienced an event that was expected to knock it down 5 to 10 percent, or even more, and instead it rallied. Clearly, there is solid demand for stocks at this point. Plus, as I continue to write, the fundamentals here in the U.S. remain sound. Are there risks? Sure, and Chinese currency is at the head of the list of international concerns, but we are doing pretty well, which is something to keep in mind in the days ahead.

So how much risk is in the market right now? Just as I do with the economy, I review the market each month for warning signs of trouble in the near future. Although valuations are high—a noted risk factor in past bear markets—markets can stay expensive (or get even more expensive) for years and years, which doesn’t give us much to go on timing-wise.

Of course, there are other market risk factors beyond valuations. For our purposes, two things are important: (1) to recognize when risk levels are high, and (2) to try and determine when those high risk levels become an immediate, rather than a theoretical, concern. This regular update aims to do both. 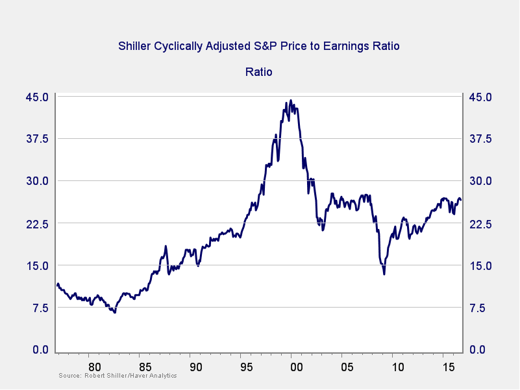 There are two things to take from this chart. First, after recovering from the pullback at the start of the year, valuations are nearing the levels of 2007–2008 and 2015, when previous drawdowns started. Second, even at the bottom of the recent pullback, valuations were still at levels above any point since the crisis and well above levels before the late 1990s.

Although they are close to their highest levels over the past 10 years, valuations remain below the 2000 peak, so you might argue that this metric does not suggest an immediate risk. Of course, that assumes we might head back to 2000 bubble conditions, which isn’t exactly reassuring. In conclusion, risk levels remain high, although not immediate.

As good as the Shiller P/E ratio is as a risk indicator, it’s a terrible timing indicator. One way to determine whether risks are immediate or not is to look at changes in valuation levels over time instead of absolute levels. 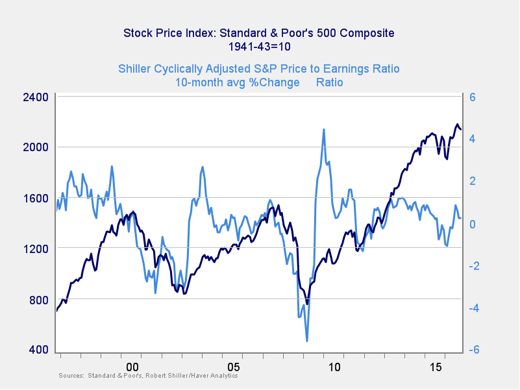 From this chart, you can see that when valuations roll over, with the change dropping below zero over a 10-month or 200-day period, the market itself typically drops shortly thereafter. With the recent recovery, we’ve moved back out of the trouble zone, and although the trend has turned negative again, we are still in positive territory. Although risks remain, they may not be immediate. Still, this metric will bear watching. 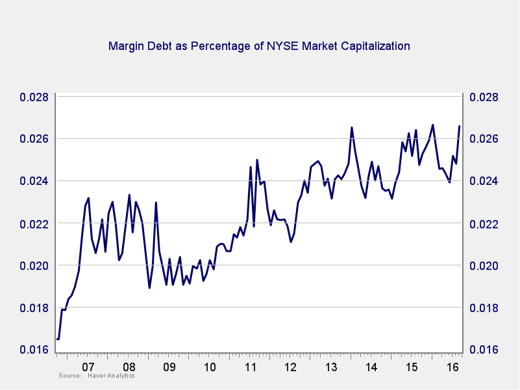 After declining at the start of the year due to the recovery from the pullback, debt levels have climbed in the past several months, back to the highest level since the financial crisis. This kind of increase suggests that risk levels are rising once again, and they certainly remain high by historical standards. Again, however, I don’t think this is necessarily an immediate risk, but we need to keep our eyes open.

Consistent with this, if we look at the change in margin debt over time, spikes in debt levels typically precede a drawdown. With the absolute risk level high, the immediate risk level is also rising: the change in debt indicator is approaching, but not yet at, the 10-percent annual increase that suggests risk is has become more immediate. 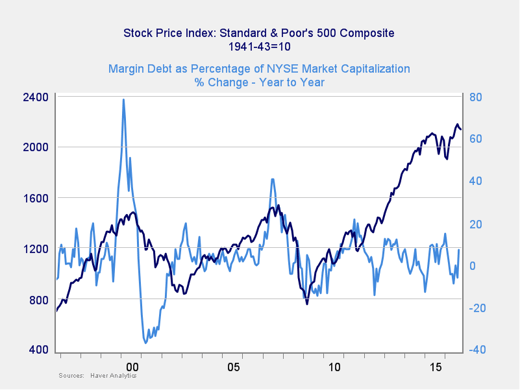 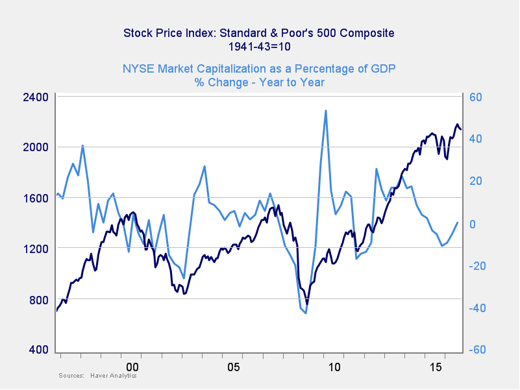 On an absolute basis, the Buffett indicator is actually somewhat encouraging. Although it remains high, it has pulled back to less extreme levels. On a change-over-time basis, however, downturns in this indicator have typically led market pullbacks—and once again, we see that here. With the recent uptick, though, this indicator suggests the risks are not immediate.

Technical metrics are also reasonably encouraging, with all three major U.S. indices well above their 200-day trend lines despite a recent scare. Even as markets remain close to new highs, it’s quite possible that the advance will continue. A break into new territory could actually propel the market higher, despite the high valuation risk level.

The difference between high risk and immediate risk