The Stock Market and the Economy

Numbers like these are the reason for a question I frequently get asked by friends who are not in the business of following the markets: what, if any, relationship exists between the stock market and the economy? It’s a very fundamental question with a very fundamental answer. The stock market is a distillation of a part of the country’s economy—an aggregate of the price investors are willing to pay to own public businesses that contribute to the economic output of the country. When pricing companies, investors evaluate where the company is and where it is headed. GDP, on the other hand, is a sum of the entire economic output of the country. And therein lies the difference. The GDP tells us where a country is or has been economically, while the stock market is a bet on where its businesses are headed.

Looking at the Data

The best way to understand the relationship between the stock market and the economy is to look at data. Let’s compare the S&P 500 returns to real GDP growth rates for the U.S. over a very long time horizon. The chart below plots the annual S&P 500 total returns against the annual U.S. real GDP growth rate for the period from 1930 to 2020. Visually, the linear distribution does not look clean. The dots of the scatterplot, which appear all over the place, don’t reflect a clear trend. 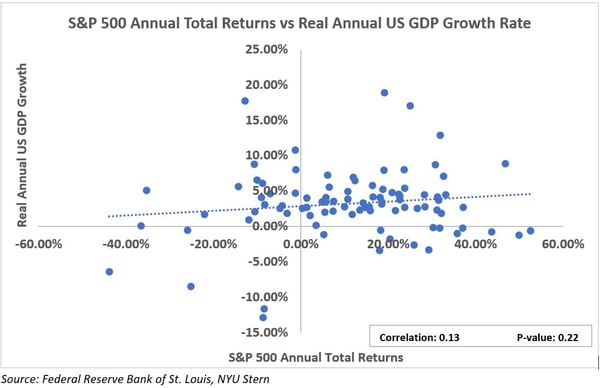 What can we tell from this data? It is generally believed that equity markets are forward-looking. In other words, current economic news has already been discounted in equity prices. So, equity returns are likely reflecting future economic conditions and not past or present ones. To test this hypothesis, we can regress S&P 500 annual returns against the following year’s GDP growth rate. As you can see in the chart below, the dots on this scatterplot are tighter around the trend line. With several dots plotting in the periphery, there is still plenty of noise. Nonetheless, a positive relationship between S&P 500 returns and next year’s economic growth appears to be slightly clearer. 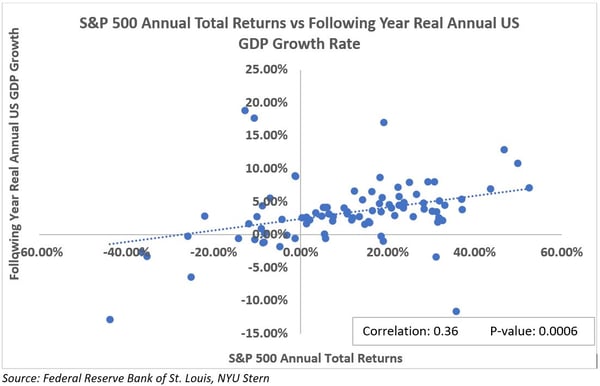 Considering the strong S&P 500 returns of 18.4 percent in 2020, it’s not surprising the GDP growth rate has been strong in 2021. And, as mentioned above, the S&P 500 has delivered a 15.25 percent return in the first half of 2021. This result is above the long-run historical average of 10.3 percent for the year and may well exceed the return generated in 2020. This scenario foretells continued strength in economic growth in the U.S. Most recent economic data attests to the strength in the economy, and the momentum is likely to continue.

Looking ahead, if equity prices begin to roll over despite strong earnings or if the rate of the rise of equity prices slows down, what should we do? The answer is fundamental. We should begin to pay closer attention to the data, because slower economic growth may not be far behind.