The Presidential Election and Free Trade 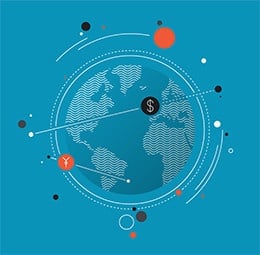 Today’s economic news comes straight from the campaign trail, but it might not be the news you think. The big story is that opposition to free trade is now a major vote winner—and an issue that stands to affect the policies of both parties.

With Trump favoring massive tariffs on Chinese imports and Sanders winning in Michigan on a populist agenda, the narrative among an increasing number of voters is that trade is bad for the country, bad for the economy, and bad for workers. Whether that’s true or not, trade restrictions and tariffs are back on the political agenda in a way they haven’t been for decades.

The trade-offs of free trade

We’ve seen this kind of trend before, with protectionists passing laws intended to shield American workers. The lawmakers in question were Smoot and Hawley, and their 1930 tariff law is generally credited with making the Great Depression as bad as it was. High tariffs here were followed by tariffs everywhere, and as trade collapsed, so did the world economy.

The counterargument is . . . so what? According to its opponents, trade has not been good for the U.S., so a loss of its benefits is no real loss at all. From an employment perspective, this doesn’t seem unreasonable. After all, the thinking goes, U.S. wages have stagnated as manufacturing jobs have migrated abroad.

Looking at the bigger picture, though, it’s deeply unreasonable. There are now more jobs in the U.S. than there were 30 years ago, even as wages have continued to grow, so the employment damage has been minimal, at least at that level. Moreover, many of the people who now decry free trade have jobs in the technology sector (a major exporter). Many opponents of trade drive cars and own flat-screen TVs they might not have been able to afford without it.

The benefits of trade are real. Unfortunately, so are the costs.

The best solution, economically speaking, is to keep trade at high levels, and even expand it, while helping those negatively affected by it cope better. Historically, the Republicans have owned the first part of that idea and the Democrats the second. After 30 years, the first half of the formula has been accomplished much more thoroughly than the second.

Why restricting trade could backfire

A large portion of the American population is keenly aware of the costs of trade but takes the benefits for granted. Both Trump and Sanders are appealing directly to those people. Even if these two candidates don’t get their respective parties’ nominations, the winners will certainly be pulled in that direction, as we can already see with Hillary Clinton.

What would it mean to impose tariffs on imports? Here’s an example:

This is a direct transfer of money from buyers to sellers, with consumers directly financing jobs at the seller companies.

This example shows why many industries favor protectionism, as it supports their profits (and jobs) at the expense of the consumer. Thanks to free trade, there are no U.S. manufacturers of TVs. The Chinese can make them cheaper, so all of the TV manufacturing jobs have migrated there. U.S. consumers get $100 TVs, while U.S. TV employees have lost their jobs.

Now, if we raise tariffs, everyone will have to pay $150 for a TV, and some of those jobs might return to the U.S. over time—the key words being some, might, and over time. In return, China and other countries will immediately and certainly raise tariffs on U.S. products, which will definitely cost jobs in U.S. export industries. A tariff increase would raise consumer costs and cut U.S. jobs, in exchange for the possibility of recovering some jobs.

That is exactly what happened in the 1930s. Rather than bringing jobs back, protectionism destroyed jobs across the board.

No matter what, a big risk

None of this is to deny the very real costs of trade to the U.S. economy and to workers. The message from the presidential race is that the damage has reached a breaking point for a critical proportion of the electorate, and that something has to be done no matter who wins. We have enjoyed the benefits of free trade; now we have to pay the costs.

Either way, if we restrict trade or simply address its effects, it will cost the U.S. economy. In terms of economic risks, this is a very big one—and all the more dangerous because we haven’t faced it in the U.S. for decades.