The Outside View: The U.S. Labor Market

I’ve maintained for some time that the U.S. labor market is doing very well. Although it's too soon to call it a "boom," that isn’t out of the question given job-creation levels unseen since the mid-1990s and a drop in the unemployment rate back to normal levels.

Nonetheless, some still argue that the statistics are lying: that there are fewer jobs per the total population, that those jobs are all low wage or part time, or that workers aren't getting the income they deserve.

The first two points are demonstrably incorrect. The third is more of a value judgment, one that's made every day by workers themselves. Although they largely agree they’re not making what they should, they’re starting to be able to do something about it as the labor market improves.

I want to point out three things that wouldn’t be happening if the labor market were not strong. This is a good way to apply an outside view—looking at facts beyond the statistics in order to illustrate a larger reality.

Walmart raises wages. The first promising sign is Walmart’s decision to offer raises to most of its workforce. Walmart is the poster child for both lower prices and lower costs, and a proverbially cheap employer. For Walmart to do this, the company must have believed it was inevitable—and wanted to get some credit for being proactive.

Why would wage increases be inevitable, though? Surely there are lots of people eager to work for whatever Walmart will pay? Apparently not. This is a primary indicator of the strength of the labor market, when an employer is forced to offer higher pay to attract the lower-wage, lower-skill labor it needs. It speaks to an actual shortage of workers in that cohort.

This is a very positive sign, not only for Walmart workers but for those in higher-pay categories.

Strikes continue. The second major indicator of labor market strength is the two strikes going on right now, at West-coast ports and in refineries across the country. You may not have heard of them—or of the labor movement in general in the past several years—but they are having a significant effect on the U.S. economy.

Just as with Walmart, if labor market conditions were weak, the unions couldn’t carry off extended strikes. The fact that they can (and actually look to be winning) suggests that the balance between employers and employees is changing, to the benefit of the latter.

Voluntary quits rise. Compared with these two large-scale trends, the final point is somewhat statistical but still worth mentioning: voluntary quits in the workforce. You only quit a job if you are quite confident you already have or can get another one. Voluntary quits are a great indicator of how workers are voting with their feet about the condition of the job market.

As you can see in the chart below, quits are up substantially, approaching the levels of the mid-2000s. We aren't quite there yet, but the trend is clear. With the decline in unemployment, further increases look to be only a matter of time. 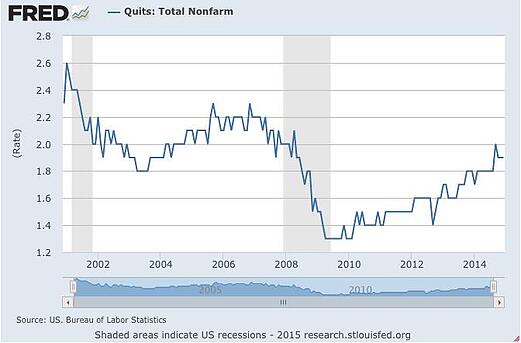 Reality lines up with the stats

Much of the discussion around the strength of the job market is based on the numbers reported by the Bureau of Labor Statistics. This is useful information, but we should remember that it’s only a reflection of the reality of business.

When we look at what businesses are actually doing, with Walmart, and how unions are successfully flexing their muscles, and how individual workers are voting with their feet, we are looking at the reality itself. That is what determines how jobs and workers are doing—and fortunately, it's saying the same thing as the stats. The employment recovery continues strongly.