The Health Care Vote and the Stock Market 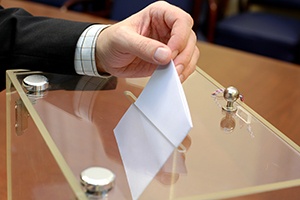 Today, the Republicans are set to make a high-stakes gamble on one of their signature issues, repealing the Affordable Care Act. They don’t know whether the bill will pass, but at President Trump’s behest, they are bringing it to the floor. Trump framed it this way: If the bill fails, then Obamacare survives. Given the energy the Republican Party has invested in repeal, this is certainly a moment of high political drama.

A "put up or shut up" moment

Up to now, the market rally has been based on the expectation that Trump and the Republicans would enact meaningful change. Hope has been the dominant emotion since the election, and all of the political noise has been viewed in that context.

With the health care bill, we will find out whether meaningful change can really happen or not. Recent market weakness may reflect an ebbing of hope on that front. After all, if health care reform can’t get done, tax reform looks much less likely. This bill is a reality check on whether the Republicans can deliver on their policy promises. If not, the premise of a new low-regulation and low-tax era may be reconsidered.

That narrative, however, has been challenged by Trump’s decision to put the Obamacare repeal out there to pass or fail, and to abandon the attempt if it fails. Either way, Trump is setting himself up for more bargaining power against Congress in the future. If the bill passes, he takes credit for holding members’ feet to the fire and pushing it through. If it fails, he makes the case that this kind of Washington inside baseball is exactly what he ran to change—and can then go after the congresspeople who voted the bill down. Pass or fail, he comes out in better shape to move the rest of his agenda forward.

In the long run, bill's failure might be better for the market

Even if the bill passes the House, of course, the story's not over. It still has to go through the Senate and then be reconciled, but a pass would be a good sign for the market. If it doesn’t, we might see a pullback. If so, I would expect that pullback to be modest and short lived, as fundamentals remain strong. And in the medium term, a fail might actually be better for markets than a pass.

It sounds counterintuitive, but consider this: what matters most to the economy and the market is tax reform, not repeal of Obamacare. Setting Obamacare aside, if the bill fails, it would free the administration and Congress to proceed immediately to tax reform. It would also likely enhance the power of the president, and the congressional leadership, to get a tax reform bill through—that is, faster passage of a more important bill, sooner. Viewed that way, you can see how a fail might actually end up better for the market than a pass.

Right now, markets seem to be cautiously giving Republicans the benefit of the doubt and assuming the bill will pass. If it doesn’t, their ability to change policy for the better might come into question. All things considered, though, this might be the kind of battle the administration can afford to lose in order to win the war.