So, You Want to Remove China from Your Portfolio?

In 2021, we have seen our fair share of requests from advisors and their clients to remove or reduce the exposure to China in their portfolios. This has happened for several reasons. In a previous post, I discussed both the strong foreign direct investment into China in 2020 and the stark contrast between the country and the rest of the world in 2020 nine months into the pandemic. Nearly a year later, we have seen the Chinese government take swift actions around foreign direct investment, including the planned delisting of Chinese ride-hailing company, Didi, from U.S. exchanges; fines on technology firms; and questions around the future of U.S. foreign direct investment.

These actions have come so swiftly that they have caught some investors off guard. The result has been a decline in U.S.-listed Chinese stocks. The Nasdaq Golden Dragon China Index, for example, which tracks companies whose common stock is publicly traded in the U.S. but carry out a majority of their business within the People's Republic of China, is down by more than 43 percent year-to-date. Between the volatility and the ongoing political tensions, retail investors have started to question whether they want to be invested in stocks with exposure to China at all.

Where Is Chinese Exposure Commonly Derived?

Exposure to China is typically derived in its most concentrated form via emerging markets. Coming into 2021, the MSCI Emerging Markets Index contained a roughly 40 percent exposure to countries domiciled within China. Today, this number is closer to 34 percent, which has been driven down by the previously mentioned sell-off in Chinese stocks. So, is removing China from a portfolio as simple as cutting out emerging markets? Absolutely not.

The common international all-cap index, the MSCI ACWI ex-US Index, contains roughly 10 percent within China. But the place a company is domiciled hardly tells the full story in today’s globalized world. If we use revenue or sales exposure, even the S&P 500 contains 7.5 percent exposure to China and has increased by 18.6 percent year-over-year, per FactSet. The MSCI ACWI ex-USA Index contains roughly 15.4 percent revenue exposure to the country. Even international funds hold very little China-domiciled exposure. For example, the MSCI EAFE Index and FTSE Developed All Cap ex US Index contain roughly 7.7 percent and 7.1 percent revenue exposure to China, respectively, per FactSet.

How Can You Lower Exposure?

The MSCI EAFE and FTSE Developed All-Cap indices offer lower exposure at the developed international level, but what about emerging markets and global strategies? For those looking to move away from China, we have seen a few products come out in 2020 and 2021 within emerging markets that remove the exposure at the domicile level. While these products will often continue to have revenue exposure to the country due to the relationship between China and other emerging market economies, it is typically at a reduced level. At the global level, we see a similar story due to the increasing share of China as a percentage of global GDP. Per the World Bank, China composed 17.4 percent of the world’s total GDP in 2020. In the case of global benchmarks such as the MSCI All-Country World Index, the country represents roughly 3.8 percent of domicile exposure and 10.4 percent revenue, per FactSet. Even in the case of indices such as the S&P Global 100, which doesn’t have any specific China-domiciled companies, the revenue exposure remains close to the 10 percent mark.

How Does Removing China Affect Your Portfolio?

Now that we know which benchmarks to focus on and areas to look at, how does removing China affect your portfolio?

The chart below shows a side-by-side country comparison between the MSCI EM Index and the MSCI EM ex-China Index. We immediately notice the move from Chinese assets into Taiwan, Korea, India, Brazil, South Africa, Russia, and Saudi Arabia. 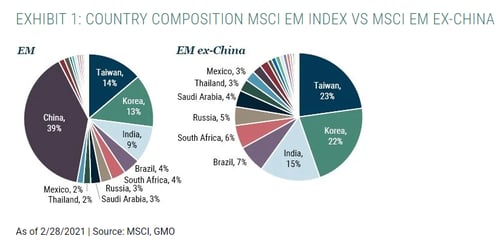 Next, you’ll see the move from consumer discretionary and communication services in favor of IT, materials, financials, and energy. This is primarily driven by the shift to Taiwan, Korea, and India. In addition, the universe and liquidity are cut significantly by removing China.

Discussing the Impact with Your Clients

Of course, it is important to discuss the impact of removing China from a client’s portfolio. As previously mentioned, China makes up a significant portion of the world’s GDP and has fueled much of the global growth over the past two decades. The country will not move away from this contribution in the immediate future. In addition, the mega-cap technology and internet names that have been so important to Chinese growth can lead to a moderately smaller-cap and value-oriented portfolio without the country. While data on ex-China products remains somewhat limited, early data suggests that emerging market ex-China products carry a risk and performance profile aligned with that of slightly smaller capitalization and less growth-oriented exposure. While China remains a small percentage of the global stock market as noted in the MSCI ACWI exposure, it is important to recognize the importance the country plays in global growth. This aspect makes it particularly difficult to make a clean separation away from the global economy.